Your fastest driver of the session so far, @jpmontoya, pulls back into his @Team_Penske pit stall. #TGPLB pic.twitter.com/N2nsGBLQaO

.@jpmontoya debriefs with the team, after finishing quickest in Practice 1. #TGPLB #IndyCar pic.twitter.com/86wiwOdjLA

Josef Newgarden and Takuma Sato were fourth and fifth.

With just under 15 minutes to go, Alexander Rossi nosed into the tire barriers at Turn 8 in his No. 98 Andretti Herta Autosport with Curb-Agajanian Honda.

“We had a cut left front, so we had to put a new front tire on,” Rossi told IndyCar Radio’s Nick Yeoman. “It caught us out a little bit. The initial laps were pretty positive. It’s a little setback but we only lost about 10 minutes.

“It was alright, actually. Front wing was gone, but very minimal suspension damage.

“It’s amazing man. I’m really pleased to be in California. It’s an amazing atmosphere and I feel really fortunate to be here.”

It brought the session under a red flag and forced track repairs, which took the session down to under 7 minutes remaining. There was a five-minute extension to the session, to extend it from a planned 10:45 finish and 45 minutes to 10:50 a.m.

A second incident occurred when Charlie Kimball ran in too deep at Turn 9 in his No. 83 Tresiba Chevrolet, with more brake issues. The car didn’t suffer any sustainable damage, but it did bring out another red flag and an early end to the session.

Still, after having a similar brake-related problem at the end of St. Petersburg, it’s weird to see Kimball parked again.

The session began with temperatures of 68 degrees Fahrenheit ambient and 86 on track.

Times are below; second practice occurs at 2 p.m. PT and local time. 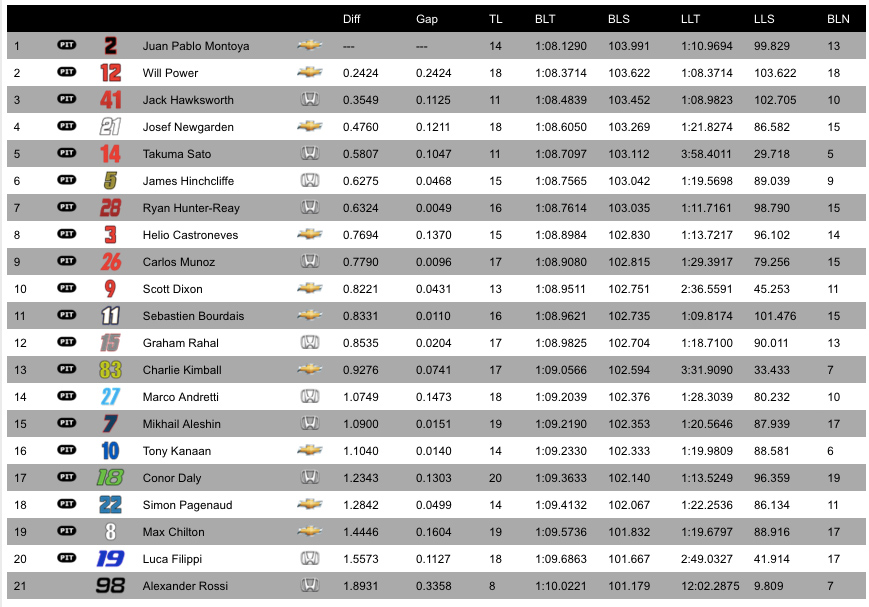