LONG BEACH, Calif. – Simon Pagenaud took his first win with Team Penske today in Long Beach, but wasn’t affected by the Official Warning assessed by INDYCAR following his exit from the pits.

In victory lane following Round 3 of the Verizon IndyCar Series season, Pagenaud told NBCSN’s Kevin Lee he didn’t realize how close his No. 22 PPG Automotive Refinishes Team Penske Chevrolet came to being too far to the left.

Given it was a game of inches, he thought he was OK.

“It was an inch on the race track there, so I’m good,” he said. “The left sides on the right side of the dots, which it is; so I’m good.”

He also said “I don’t care,” about whether the warning mattered.

Here was INDYCAR’s Statement on the penalty:

Simon Pagenaud’s actions during the Toyota Grand Prix of Long Beach were deemed an infraction per Rule 7.10.1.1. “Lane Usage” of the INDYCAR Penalty Guidelines: Failing to follow designated procedures entering or exiting the pit area, including the proper use of the acceleration and deceleration lanes. The penalty for this infraction ranges from a warning (minimum), putting the driver to the back of the field (mid) and drive-through or stop and go/hold (maximum). INDYCAR race stewards determined his actions were not severe enough to warrant a harsher penalty than the warning that was issued.

Pagenaud did elaborate on the day, warning aside, as he finally broke through to win his first race for Team Penske.

“It is a relief, from your questions,” Pagenaud deadpanned to the room full of reporters.

As for the rest of the day?

“Great day. Fantastic team effort. Obviously we made an interesting call on the aerodynamic setup. Thank (engineer) Ben Bretzman for pushing me to it.

“Nobody mentioned it to me. I focused on the job. I didn’t know it was that close.

“INDYCAR has made it really clear what you can and can’t do. It was certainly on the verge of being a stronger penalty. I did get a warning. So did Munoz.”

In response to that, it was worth asking whether Pagenaud still found warnings acceptable – say if he wound up on the other side of the coin.

“They did the manual, and sent it to the drivers,” Pagenaud explained. “The drivers association and INDYCAR and the teams worked with INDYCAR to what was going to be a warning, a min penalty, a mid penalty. Each one of those levels has a different consequence.

“Going into the race, I know the rulebook, I know you can take risks, the limit. It’s just racing. Quite frankly, another inch to right wouldn’t have changed the outcome of the race.” 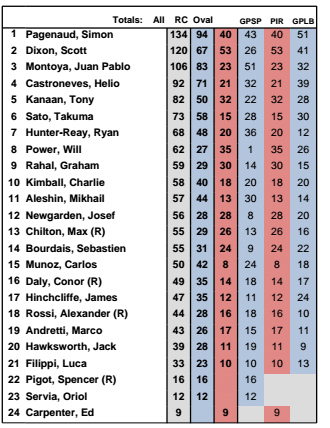