LONG BEACH, Calif. – What had been a fairly cut-and-dried, largely uneventful Toyota Grand Prix of Long Beach turned eventful on the final pit stop sequence, and ended with a controversial winner.

Simon Pagenaud finally secured his first win for Team Penske, but after receiving an Official Warning from INDYCAR following his pit exit and blend after his last pit stop on Lap 54.

Pagenaud crossed over the blend line and exited just ahead of Scott Dixon, but received the warning for “Lane Usage” per INDYCAR’s Penalty Guidelines sheet.

The Rule assessed is 7.10.1.1, which reads: “Failing to follow designated procedures entering or exiting the pit area, including the proper use of the acceleration and deceleration lanes.”

Per #INDYCAR penalty guidelines 7.10.1.1 Failing to follow procedures entering or exiting the pits can be a warning. https://t.co/ISTx63WIyq

The Minimum Penalty is a Warning, a Mid-Penalty reverts a driver to the Back of the Field and a Maximum Penalty of Drive through, Stop and Go/Hold.

Another rule that theoretically could have been in play, but was not in this case, was Rule 7.1.3.5.

It falls under the Rule 7.1.3 Yellow Condition subset in the Rulebook; on the Penalty Guidelines sheet, it appears as an on-track penalty. However, as this was a Lane Usage violation and not a Blend Line violation, that Rule is not applicable.

This Rule exists in the INDYCAR Rulebook; the penalty assessed here was from the INDYCAR Penalty Guidelines sheet.

Here's the rule from rulebook pic.twitter.com/BRsYWC35oK

Nearly an hour following the completion of the race, IndyCar officials released the following statement:

Simon Pagenaud’s actions during the Toyota Grand Prix of Long Beach were deemed an infraction per Rule 7.10.1.1. “Lane Usage” of the INDYCAR Penalty Guidelines: Failing to follow designated procedures entering or exiting the pit area, including the proper use of the acceleration and deceleration lanes. The penalty for this infraction ranges from a warning (minimum), putting the driver to the back of the field (mid) and drive-through or stop and go/hold (maximum). INDYCAR race stewards determined his actions were not severe enough to warrant a harsher penalty than the warning that was issued.”

Polesitter Helio Castroneves was third, in the first caution-free race in INDYCAR since Mid-Ohio in 2013, and fourth at Long Beach in its history.

Juan Pablo Montoya and Takuma Sato completed the top five, with Sato pressing Montoya throughout the race but unable to pass. Still, it was a good run from the driver of the No. 14 ABC Supply Co. Honda, who led the Honda contingent.

Pagenaud extends his points lead as a result. 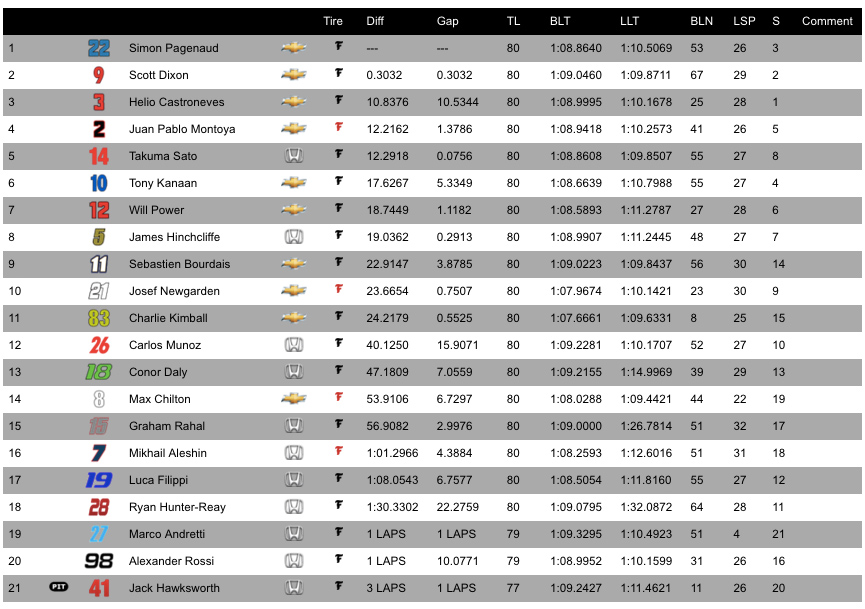