The FIA Formula E Championship resumes this weekend on the streets of Paris after its last race at Long Beach to kick off the month of April.

What this does beyond add another new race to the calendar is give Formula E tire technical partner Michelin a proper home race.

The Clermont-Ferrand-based company has been integral in the growth of the championship, helping develop a treaded dry/wet tire that the series has utilized from the start.

More than the fact the tire is all weather is a more interesting and important point: Formula E has embraced an 18″ tire as the first open-wheel formula to do so, an idea Michelin had proposed to Formula 1 when it considered re-entering for 2017. Michelin proposed the 18″ idea in 2013.

“We’d been talking about the opportunity to bring 18” tires into racing for quite some time,” Couasnon told NBC Sports in a phone interview.

“One of the first targets was Formula 1, had been talking about that for some time. We never had the opportunity there… there was a difference between what we wanted and what they wanted. FIA talked about the project here… and Michelin was very interested.

“We came in with a couple proposals, where we could bring innovation and technology to the series. Combined with dry and wet performance in one tire. It was quite a possibility. We’ve been very excited since day one.”

He then further elaborated on plans for the the next generation tires (Michelin is confirmed through 2019). Michelin is working to develop the second generation tires, which would deliver a solid improvement in reducing rolling resistance to help extend the range.

“If you start with what are the key challenges for the future, they are pretty clear,” Couasnon explained. “The number of electric vehicles will increase. If you want mobility to be sustainable, you need to increase safety and decrease impact on environment.

“For the safety and grip … you still want the pleasure of driving, but want to decrease impact on environment. You have to be efficient. Build the tire; you want a lighter but safer tire. When you have that, that’s a good thing.”

Couasnon has been bullish on Formula E. It’s only 17 races into its lifespan as a series, with 11 races in its inaugural 2014-’15 season and six now into season two, but Michelin feels strongly about the series.

“We had two goals with Formula E. The first is to understand how to balance energy efficiency and pure grip for the tires,” he said. “If you can be efficient, the driver can use it or go faster… or a bit longer, or change the strategy. That’s where the tire can bring something.

“The second thing, having a special tire, we’ve been able to test the design. The future… generation of Michelin Sport… the Pilot Sport 4, uses the same tread pattern as in Formula E.

“When the project (of Formula E) was presented, we thought, we cannot not be there. We must remember we had introduced the first green tire in market. I remember (in 1992), we were asking, ‘Why is this happening in 1992?’

“Several generations later, we understand why this is so important. For our future, electric vehicles, I’m convinced will be part of the solution.”

Couasnon said although he would have liked F1 to taken its 18-inch tire realistically, he can’t look back on the missed opportunity for the company. Michelin last raced in F1 in 2006, the final season of tire competition before Bridgestone was the single tire partner for four years. Pirelli entered in 2011.

“It’s interesting because we have been in MotoGP this year, and you see why,” he said. “Each rider, motorcycle and bike can do their maximum potential on the track. It is difficult to do that elsewhere.

“I feel F1 should be the pinnacle where the driver doesn’t have to manage the car, but go as fast as they can. We negotiated (for) that.

“I would love to be able to help demonstrate what a Michelin tire could bring to the show.”

All photos below, comparing the race tire (top) versus the Michelin Pilot Sport 4 (bottom). 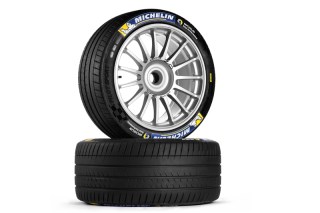