BIRMINGHAM, Ala. – Sebastien Bourdais has a new sponsor (Europa), new LED wheel covers (first premiered at Sonoma last year and now on again this session), and a new place on the speed charts – first after the first 75-minute practice for the Verizon IndyCar Series at Barber Motorsports Park.

The driver of the No. 11 Europa Chevrolet for KVSH Racing led opening practice for the Honda Indy Grand Prix of Alabama with a best time of 1:07.3399.

The wheels were just being tested today, per a team spokesperson to IndyCar Radio’s Jake Query. See below for more information.

Here are the LED lights in the wheels of @BourdaisOnTrack . Adds about a 1/4 lb. Won't be used in race. @GriffPope pic.twitter.com/zxMbb2heur

While Bourdais’ Chevrolet was on top, Honda had a very strong session with Jack Hawksworth, Carlos Munoz, Ryan Hunter-Reay, Takuma Sato and Graham Rahal locking down spots two through six.

.@jpmontoya was penalized for unsportsmanlike conduct and forced to sit out the last two minutes of practice. #INDYCAR #HIGPA

With an electrical issue, the team not able to blame a battery, Tony Kanaan was only able to complete six laps in the session with the No. 10 NTT Data Chip Ganassi Racing Chevrolet. 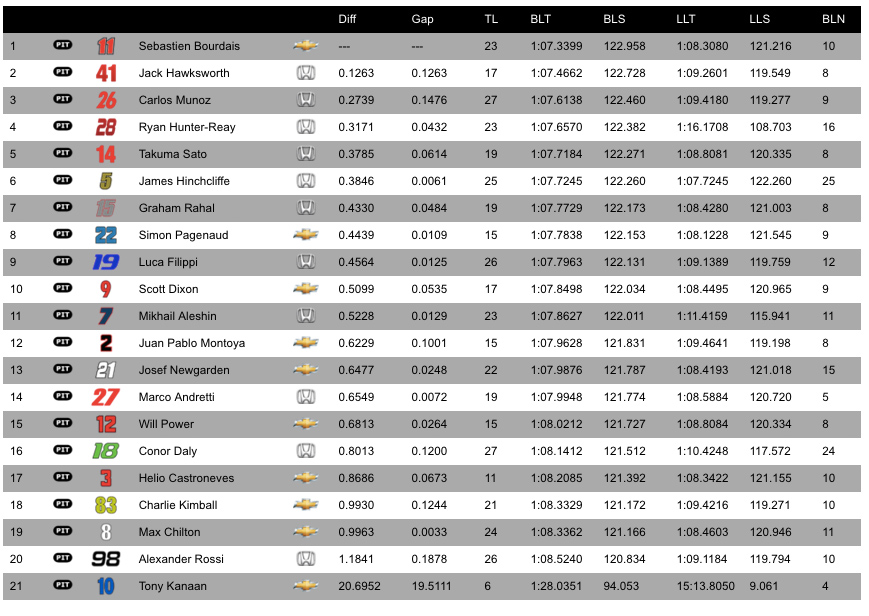