BIRMINGHAM, Ala. – In the second 75-minute practice session of the weekend at the Honda Indy Grand Prix of Alabama, Round 4 of the Verizon IndyCar Series season, Honda runners ended 1-2-3.

A.J. Foyt Enterprises’ pairing of Takuma Sato and Jack Hawksworth were first and second in the Nos. 14 and 41 ABC Supply Co. Hondas, and were split by only 0.004 of a second with Sato on top.

Hawksworth was second in the morning session as well, behind Sebastien Bourdais.

James Hinchcliffe was third, continuing his practice pace after also ending high up the charts in Long Beach, with Will Power and Graham Rahal completing the top five.

Similar issues befell Andretti Autosport’s four-pack, with none of its four cars higher than 11th.

The session was delayed to start owing to earlier rain that fell during the Pirelli World Challenge GTS race, and then forced the Pro Mazda Championship Presented by Cooper Tires into a track-drying qualifying session (where Aaron Telitz took a dramatic pole for Team Pelfrey), but the session ran to its conclusion without any red flags.

Temperatures started at 70 degrees Fahrenheit ambient and 86 on track when the session began, but fell to 69 and 83 45 minutes into the session, per Firestone. 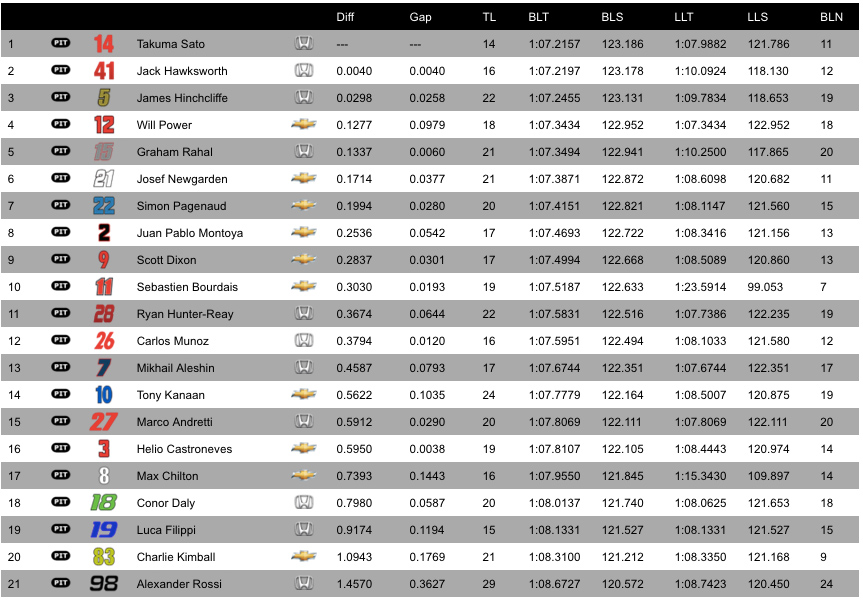