BIRMINGHAM, Ala. – Quick runs in the middle of the 45-minute practice session propelled James Hinchcliffe, Scott Dixon and Will Power to the top of the timesheets in succession, with Power ending third practice fastest at 1:07.0198 at Barber Motorsports Park.

The driver of the No. 12 Verizon Team Penske Chevrolet put a Chevy back on top after Hondas impressed most of Friday, with Takuma Sato and Jack Hawksworth ending 1-2 in second practice. In first practice, although KVSH Racing’s Sebastien Bourdais led the session, Hondas clocked in second through sixth.

Power was less than a tenth ahead of Dixon, who posted a best time of 1:07.1173 in the No. 9 Coca-Cola Chevrolet for Chip Ganassi Racing.

As the red flag comes out for Sato's spin, @12WillPower sits P1 with 2 minutes left in practice. #HIGPA #IndyCar pic.twitter.com/U0NLAkmPS1

.@12WillPower pulls into his pit stall after being quickest in Practice 3! Quals next at 4pm ET. #IndyCar #HIGPA pic.twitter.com/TraP2SSCJs

Hinchcliffe was third with Carlos Munoz and Simon Pagenaud completing the top five.

Sato, who was 12th this morning, had a late off in the session with about four minutes remaining. He locked up on corner entry into Turn 5 in the No. 14 ABC Supply Co. Honda and got beached in the gravel trap, but was towed out by the Holmatro Safety Team. It brought out a red flag.

Sato’s off was one of a number of quick off-course excursions during practice; Helio Castroneves, Simon Pagenaud and Max Chilton also had slight offs although there was nothing major.

The session was extended three minutes following Sato’s off.

Times are below. You can watch LIVE qualifying at 4 p.m. ET (3 p.m. CT) on NBCSN and NBC Sports Live Extra, at indystream.nbcsports.com for participating cable providers. 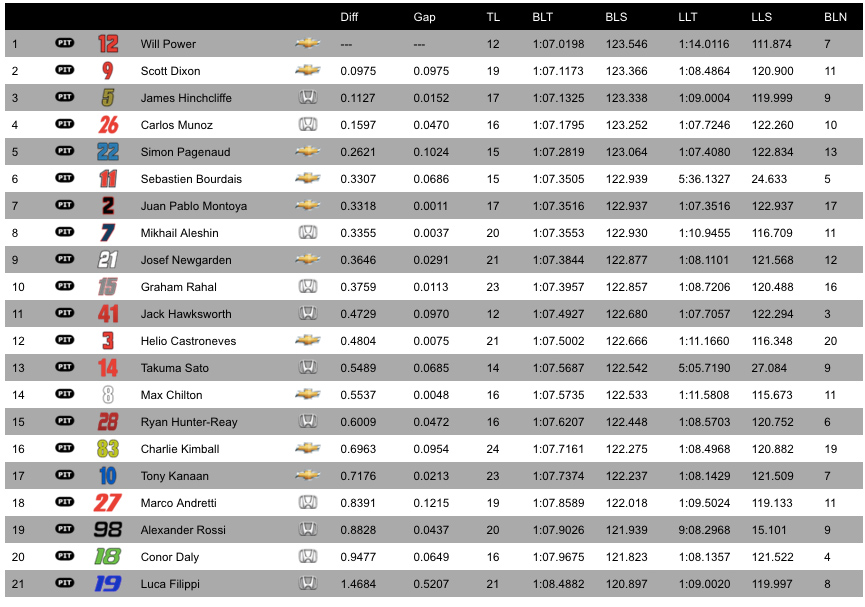