Pagenaud, driving the No. 22 PPG Automotive Refinishes Team Penske Chevrolet, clocked a best time of 1:08.0215 ahead of Graham Rahal, Scott Dixon, Will Power and Sebastien Bourdais.

All of those top five in the warmup start in the top six in the race – Rahal, Dixon, Power and Bourdais roll off sixth, fourth, second and fifth respectively. Third-starting Josef Newgarden was only 20th in the warmup.

There were two red flags, one for Carlos Munoz stopping on track with an electrical issue, although the Andretti Autosport crew got the No. 26 Honda out for a final installation lap towards the end of the extended session.

Electrical issue on No. 26 has affected shifting. Car will spend warm up behind the wall as the crew anxiously awaits its return & repair.

Great work by the No. 26 crew. With a quick fix @CarlosMunoz034 rejoins the field for a warm up and a system check. #IndyCar #HIGPA

Mikhail Aleshin also had a spin but stopped the car just before pit-in, in the No. 7 SMP Racing Schmidt Peterson Motorsports Honda.

TV coverage today starts at 2 p.m. ET with the Indy Lights Presented by Cooper Tires races from Barber, as a lead-in to IndyCar at 3 p.m. ET.

Warmup times are below. 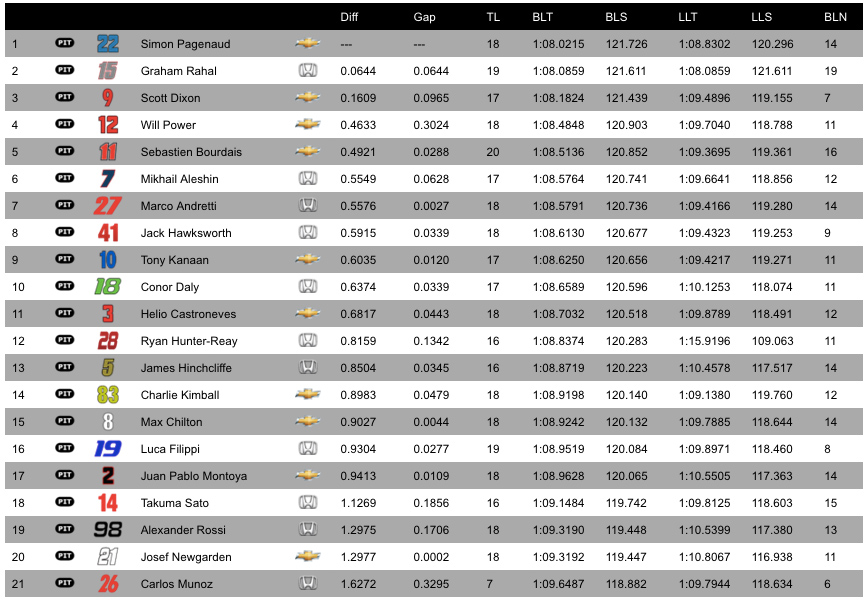