BIRMINGHAM, Ala. – Simon Pagenaud scored his second straight win in Sunday’s Honda Indy Grand Prix of Alabama through varying tire strategies, a bit of traffic, no further cautions after an interrupted start, and then a crazy and dramatic finish.

It took a Lap 86 pass of Graham Rahal at Turn 14, with Rahal’s car wounded with significant front wing damage, for him to make it back by to resume up front after controlling most of the race.

The driver of the No. 22 PPG Automotive Refinishes Team Penske Chevrolet led all but a handful of the 90 laps, losing out only on pit stop cycles, en route to his second straight win in the Verizon IndyCar Series.

It’s also his fourth finish of first or second in the first four races, and Pagenaud continues to extend his points lead.

Will Power ran second for the majority of the race, but was leapfrogged by Rahal in the final pit stop sequences.

Rahal then proceeded to go on a tear to catch up Pagenaud, gaining more than five seconds to get into the lead on Lap 81.

Pagenaud was slowed by traffic off Turn 6, and Rahal made his move to the lead into Turn 8, with Pagenaud then going through the gravel and into the lead, and Rahal’s car sustaining a bit of front wing damage.

While Rahal held the lead, his efforts were slowed by Jack Hawksworth, when he ran aground of him exiting Turn 6. Rahal tried to move to the inside to hold off Pagenaud, but wound up contacting Hawksworth and creating further damage.

Rahal’s car was wounded, and Pagenaud made it by on the inside for the lead. Rahal ended second but some 13.747 seconds behind.

Meanwhile Josef Newgarden made a late-race move of Will Power for third for the final podium position. Power got boxed in by a train of traffic and fell back.

Juan Pablo Montoya drove from last to fifth, primarily thanks to a storming first stint that saw him rise from 21st to seventh.

There were other notable moments in the 90-lap race, which ran without a yellow after the three attempts at the first start:

The series is now off for two weeks before the Angie’s List Grand Prix of Indianapolis on May 14. 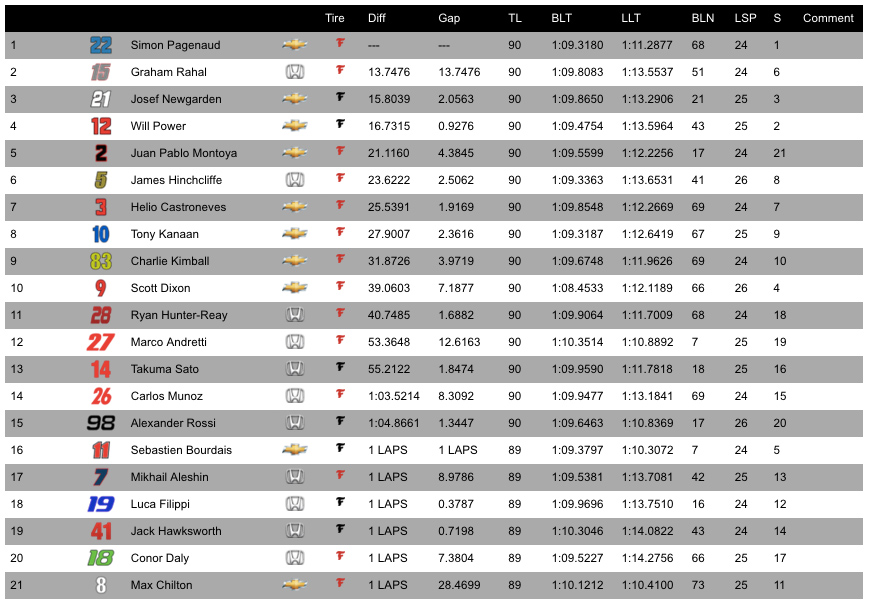