CJ Wilson Racing continues to expand its footprint beyond just its pair of Porsche Cayman GT4 Clubsports in IMSA’s Continental Tire SportsCar Challenge, with a pair of announcements that have come out in the last week.

Meanwhile ahead of this weekend’s third round of the Continental Tire Challenge season, the No. 35 Cayman GT4 driven by Tyler McQuarrie and Till Bechtolsheimer will feature a new livery and new partner, in the form of Safecraft Safety Equipment. That full release is linked here.

For Northern California native McQuarrie, this becomes the fifth different category of motorsport that he has competed in this season with Safecraft and it will be the fourth different discipline in as many weeks – we’ll have more on McQuarrie’s crazy 2016 campaign in a separate post later this week on MotorSportsTalk. New Balance also remains a key partner on the team’s car.

Marc Miller and Daniel Burkett seek their first win in the No. 33 ONE Capital/Motor Oil Matters Porsche Cayman GT4 Clubsport this weekend; the pair finished third to kick off their year at Daytona. 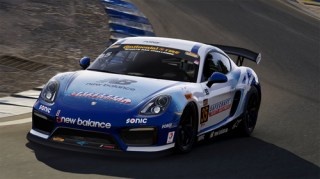