BIRMINGHAM, Ala. – Four top-two finishes in four races, and 188 out of a maximum possible 216 points, have Simon Pagenaud nearly a full race clear of the Verizon IndyCar Series field heading into the month of May.

A maximum number of points in one weekend is 54 – which Pagenaud secured this weekend with a win, scoring pole (one bonus point), and leading both one lap (one point) and the most laps (two points).

With Dixon only scoring 20 points for 10th place, Pagenaud gapped him by some 34 points in one race – expanding the lead from 14 points after leaving Long Beach last week.

Dixon leads the remaining five drivers who’ve hit the century mark in points through four races; Juan Pablo Montoya made the most of his situation to come from 21st to fifth and sits third on 136, while consistency has taken Helio Castroneves and Tony Kanaan to 118 and 106 points apiece. Graham Rahal’s first podium of the year brings him to 100 points, now sixth.

Pagenaud is the first repeat winner this year and one of eight drivers who have scored podiums; Rahal and Newgarden added their names to that list this weekend.

Through four races, the only drivers who haven’t yet scored a top-10 finish are Marco Andretti, Alexander Rossi, Jack Hawksworth, Conor Daly and Luca Filippi.

Daly, interestingly, is the highest Honda lap leader through four races with 15 laps out front in St. Petersburg. The problem for him – and for Honda – is that through four races, Chevrolet has led 506 of 530 laps overall.

Daly, Rossi and Max Chilton are all still super close in the battle for Sunoco Rookie-of-the-Year honors through four races.

Daly wasn’t much better in 20th, with his race more notable for defending his lead lap position in the middle stint of the race. Rossi made it as high as 10th after a strong first stint and a great pit stop but struggled with the floor of the car all weekend, and fell to 15th at the checkered flag.

Full points are below, via INDYCAR. Here is a link to the points after Long Beach. 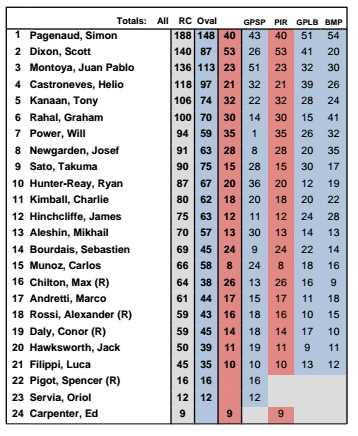