This weekend, it’s a big weekend for Mazda at Mazda Raceway Laguna Seca, even more than normal.

It always is whenever Mazda heads to its “home track” – yes, its corporate offices are in Irvine, Calif. but Monterey, at Mazda Raceway, has represented the spiritual home for the brand because that’s where it gets its “Zoom Zoom” on on track.

And this weekend has the potential to be overflowing in new and fascinating Mazda story lines across three different series.

Mazda Prototype program has its best chance yet

Start first in the IMSA WeatherTech SportsCar Championship, where its two Mazda Prototypes have something they haven’t had the last two years at Mazda Raceway: a chance.

The SKYACTIV diesel program was always a groundbreaking effort for Mazda, in taking road car technology from its production models and putting it into racing.

But with the program always a developmental effort hamstrung by reliability gremlins, and lacking for outright pace when it was running, it was never going to get much in the way of results. Joel Miller and Tristan Nunez overachieved in 2014 before getting taken out but last year, when hopes were higher for the team, neither car made inroads compared to the leaders. Not long after was when rumors began percolating that an engine switch might be in order.

Now with the Mazda MZ-2.0T gasoline engine in the back along with the refined, fully developed chassis, Mazda has four finishes in the last two races – sixth and eighth at Sebring and fourth and fifth at Long Beach – with its No. 55 and 70 cars.

The best part of those results for the SpeedSource-run Mazda Motorsports program, featuring Jonathan Bomarito and Nunez in the No. 55 car and Miller and Tom Long in the No. 70 car, is that they want more – and can taste the prospect of podium or win success.

“The whole team has a renewed amount of energy,” Long said in the team’s pre-race release. “We all see that ‘hey, we’re in this, and we’ve got a shot.’ It’s never been a question of how much hard work and dedication everyone has put forth, but when you see the results on paper – that proof – it really drives the momentum.

“For a driver, to have that confidence to not only to race for the win but to know the team’s behind you and all of the integral pieces are working… that motivation is huge. I’m hoping we have a lot more of that in Monterey.” 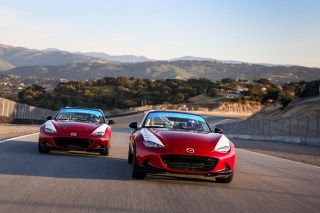 Long heads to Monterey this weekend having also played a hugely valuable – and integral – role in the development of the new 2016 Global Mazda MX-5 Cup car, which makes its series debut this weekend after testing all throughout 2015.

It’s the flagship single-make series for the #MRT24 – Mazda Road to 24 – which is Mazda’s internal sports car ladder program. It’s also just the MX-5 Cup car featured; the prior Skip Barber class was not retained into 2016.

The 2016 Mazda MX-5 Miata has received rave reviews and multiple awards since its 2015 debut, including World Car of the Year. On the racing side, 94 orders have been placed for the $53,000 MX-5 Cup race car. Sixty-four of those orders have already been delivered to customers, with additional deliveries scheduled in the weeks to come. This Friday, forty of those cars will be taking the green flag at Mazda Raceway in the first race of the 2016 Battery Tender Global Mazda MX-5 Cup presented by BFGoodrich Tires.

John Doonan, director of motorsports, Mazda North American Operations (MNAO), noted, “This MX-5 Cup race weekend represents almost two years of hard work by hundreds of people.  Having great partners like Battery Tender, BFGoodrich Tires, Long Road Racing and the many engineers within Mazda, both here and Japan, makes this a very special weekend. The rush of cars going into turn two on Friday afternoon will be an amazing sight. Those not in Monterey can tune in to the livestream. I predict epic racing action.”

One note on the entry list: Kenny Murillo will fill in for Brent Mosing in the No. 13 ALARA Racing entry.

The first two MX-5 Cup races will be this Friday and Saturday, both at 12:00 p.m. Pacific. Both races will be streamed onwww.mazdalive.com as well as www.iRacing.com and www.fanschoice.tv. A teaser is linked below:

The road to winning in the Continental Tire SportsCar Challenge ST class at Mazda Raceway, understandably, goes through the Mazda MX-5 – which has been the standard bearer of success in class here for the last five years.

Freedom Autosport enters on the heels of a 1-2 last year, when Andrew Carbonell passed Long – there’s that name again – on the final lap to bring he and U.S. Marine Staff Sgt. Liam Dwyer their first win as co-drivers. Dwyer and Long won at Lime Rock in 2014 for Dwyer’s first career win.

As we prepare for this week's @IMSA #CTSC race at @MazdaRaceway, we're reminiscing about our 1-2 win there in 2015. pic.twitter.com/aEa8LiGPQj

The win was made extra special because Dwyer’s fellow Marine Staff Sergeant Aaron Denning, the man who saved Dwyer’s life in Afghanistan, was on site during the weekend.

And for good measure, it was Carbonell’s third straight win at the track. He’s finished on the podium there every year since 2009.

“It’s almost a phenomena,” Carbonell laughed. “I don’t have a good explanation for it. It’s crazy!”

Additionally, Mazda’s win streak and Freedom’s have coincided. They’ll look to extend it to a six-pack this weekend with three entries: Carbonell and Dwyer in the No. 26 car, defending series champions Chad McCumbee and Stevan McAleer in the No. 25 car and Danny Bender and Britt Casey Jr. in the No. 27 car.

Alara’s pair of Szymczak and Piscitell make it four Mazdas entered this weekend.