There’s a pair of two-hour races for the Continental Tire Monterey Grand Prix on Sunday, Round 4 of the IMSA WeatherTech SportsCar Championship season for the Prototype, Prototype Challenge and GT Le Mans classes and Round 3 for GT Daytona.

The P/GTLM race will run first, with the PC/GTD race second. Air times are below, as are the qualifying reports.

Mazda Motorsports has done it.

The SpeedSource crew that has worked tirelessly to make the program not just reliable but now competitive has parlayed their practice pace at Mazda Raceway Laguna Seca into the pole position for Sunday’s Continental Tire Monterey Grand Prix.

Tristan Nunez led a Mazda Prototype 1-2, in the Mazda MZ-2.0T gasoline powered entry, in the No. 55 car with Tom Long in second in the No. 70 car. Nunez will share his car with Jonathan Bomarito and Long with Joel Miller.

Nunez’s last pole came Sept. 7, 2013, also at Mazda Raceway, but then in the GRAND-AM Rolex Series in the GX class, in a SpeedSource Mazda 6 diesel.

It’s the first pole for a Mazda-powered prototype since Oct. 4, 2013 at Virginia International Raceway, in the American Le Mans Series, with Dyson Racing and a Lola LMP1 chassis.

A pair of Corvette DPs were third and fourth, the No. 31 Action Express Racing entry qualified by Dane Cameron just ahead of Ricky Taylor in the No. 10 Konica Minolta Wayne Taylor Racing entry. Neither were within striking distance though, at 0.929 and 0.976 of a second back respectively.

The Mazda front row lockout came after a Mazda 1-2 ST sweep by Freedom Autosport as well, when Chad McCumbee and Stevan McAleer beat Andrew Carbonell and Liam Dwyer in a pair of MX-5s in the Continental Tire SportsCar Challenge race.

“This is a good start! The car was unbelievable. Huge effort by the guys at SpeedSource. We have a fantastic car. This is one of those moments we’ve all been waiting for here at Mazda, especially at Mazda Raceway. I was pushing my heart out and I wanted that pole,” Nunez told IMSA Radio’s Shea Adam in the immediate aftermath.

Ferrari vs. Ford. That just feels good to write.

And for the first time in the 2016 IMSA WeatherTech SportsCar Championship season, that’s what the pole battle was in the GT Le Mans class.

Major credit must go to Giacomo Mattioli’s Scuderia Corsa team – along with Risi Competitizone the only privateer efforts in class – which topped the factory Ford program in the hands of Chip Ganassi Racing, with Multimatic, for the class pole.

Daniel Serra in the No. 68 Ferrari 488 GTE took that new car’s first pole on U.S. soil, as well as the first for Los Angeles-based Scuderia Corsa within GTLM, courtesy of a last-lap flier at 1:22.867 at the 2.238-mile road course.

The No. 4 Corvette C7.R, qualified by Tommy Milner, lines up fourth with Risi’s No. 62 Ferrari in fifth, qualified by Toni Vilander. The best BMW was seventh with the best Porsche in eighth.

Milner and Oliver Gavin – or the No. 3 Corvette C7.R – look to deliver Corvette Racing its 100th win as a team on Sunday, and seek to rebound after the hard-luck, late-race dump the No. 4 car took at Long Beach.

Prototype Challenge had a barnburner of a qualifying session as several drivers exchanged the top spot; ultimately Robert Alon took his first pole in the No. 52 PR1/Mathiasen Motorsports Oreca FLM09 over James French in the No. 38 Performance Tech Motorsports car and Alex Popow in the No. 8 Starworks Motorsport entry.

Alon was due to start first in Long Beach on points, as the session didn’t meet its minimum green flag time. But after causing a yellow flag, that meant he would have his fastest time get deleted.

The Mazda Prototype Lites graduate atoned nicely and was super emotional afterwards in an interview with IMSA Radio. He’ll share the car with Tom Kimber-Smith on Sunday; French co-drives with Kyle Marcelli and Popow with Renger van der Zande.

The quirks and intricacies of the FIA Driver Ratings system meant four drivers you could reasonably classify as pros, even if their results actually classify them as “ams,” made it into the top six on the grid in the in theory pro-am GT Daytona class.

Again, all credit to the teams who’ve figured out how to master their lineups good to the regs, though.

Alex Riberas was best of the bunch in the No. 23 The Heart of Racing Porsche 911 GT3 R, taking his first class pole on track debut with a best time of 1:25.775. He’ll share his car with Mario Farnbacher; Riberas, the ex-Porsche Junior driver, takes over from Ian James as Farnbacher’s full-season co-driver this weekend.

Nielsen and Alessandro Balzan look for their second win in a row this year after winning Sebring while Lindsey and Spencer Pumpelly seek a race repeat after winning here last year.

Cedric Sbirrazzuoli in the No. 27 Dream Racing Lamborghini Huracán GT3, then a pair of unrelated Davises – Brandon in the No. 007 TRG-AMR Aston Martin V12 Vantage GT3 and Andrew in the No. 6 Stevenson Motorsports Audi R8 LMS – completed the top six. Each of these three is a talented pro in their own right.

You could argue Bret Curtis in seventh in the No. 96 Turner Motorsport BMW M6 GT3 is the first true am on the grid, and credit to him for getting the white and black aFe Power car that high up. Dodge was the only manufacturer in class that failed to qualify within the top 10 of the 17-car grid.

Tomorrow’s split race times and channels are linked below. 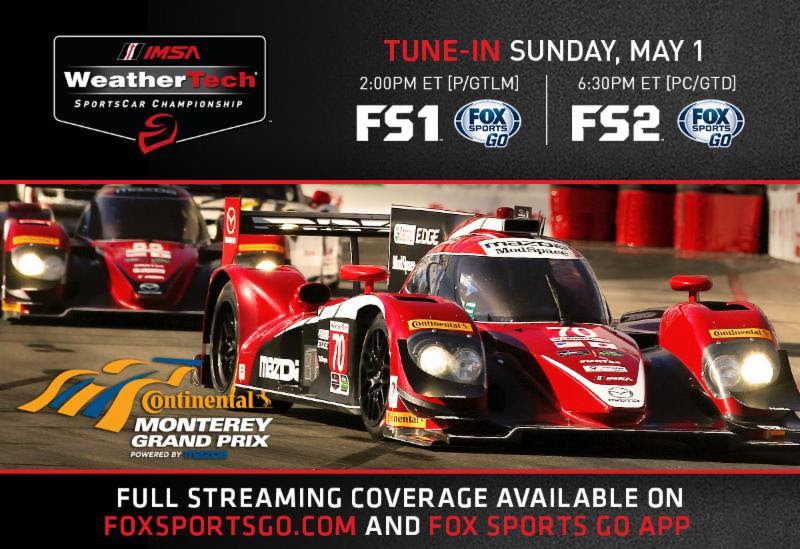