It’s been a busy last week or so for PIRTEK Team Murray and driver Matthew Brabham around the Indianapolis area.

And they haven’t even begun practicing or qualifying or even racing in the Indianapolis 500 on May 29. 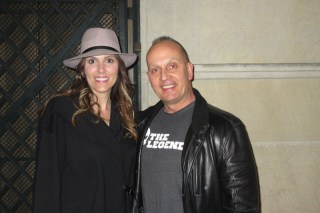 Wasilewski received over 200 medals and awards before retiring. He made over 3,000 arrests during his career with the NYPD, and also served at Ground Zero following the September 11, 2001 attacks on the World Trade Center.

The CK Crew, will allow the Chris Kyle Frog Foundation to host 500 members of the military and first responders at Indianapolis Motor Speedway throughout the month of May. Kyle was a highly-decorated NAVY Seal and sniper who was killed in 2013 in his native Texas.

Seven of those 500 members of the CK Crew will train and crew Brabham’s PIRTEK Team Murray car in the Tag Heuer Pit Stop Challenge, to be held on Miller Lite Carb Day on May 27.

“This concept is unique and it will allow a number of guys and girls to come together and form a team to hopefully get PIRTEK Team Murray to victory lane in the Pit Stop Challenge,” said Walter Wasilewski.

“Everyone knows what Chris Kyle did for America and Taya (Kyle’s widow) is carrying on his legacy with such dignity and class. I’ve had the chance to meet with Taya on several occasions in New York and she is an amazing American.

“My career in the Police Department was through some of the most dangerous times in New York’s history. Period.

“That training is going to come in handy when standing waiting for the PIRTEK Team Murray racecar to come at me. In the Police Department, you have to have faith in those around you to protect you – in this case, I have to have the faith in Matt to stop the car on his marks so we can then go about our job.”

The draft announcement was made on the start-finish line of bricks at Indianapolis Motor Speedway.

“I knew nothing about American football when I first moved back to the US from Australia in 2012, but I have really grown to love it,” Brabham said. “I have been to several Colts games and the more I know the more I am really starting to get into it.

“We had a fantasy football league with several of the drivers last year and I won it, so I must be learning something.

“It is great that we can combine two things as significant as the Colts and NFL Draft and the Indianapolis Speedway and the 100th Indy 500.

“To get up close to the Colts’ 2006 Super Bowl trophy (Vince Lombardi Trophy) was pretty cool. You don’t get to do that every day.”

* Third, Matthew Brabham’s grandfather, three-time Formula One champion Sir Jack Brabham, has been named to “The Top 100 Most Important People in Indy 500 History” by the Indianapolis Star.

Young Matthew is only the third third-generation racer to attempt to race in the 500, following his grandfather and father Geoff.

The other two families that have had three generations of racers compete at Indianapolis are the Vukovich family – Bill, Billy Jr. and Billy III – as well as the Andretti family: Mario, Michael and Marco.

“We have said it many times, but it is just an honor and a privilege to be part of this year’s Month of May and everything that goes with it,” Matthew Brabham said in a media release.