INDIANAPOLIS – Will Power did the usual business with a final lap flier putting him top of the timesheets after the opening 75-minute practice for the Angie’s List Grand Prix of Indianapolis, Round 5 of the Verizon IndyCar Series season.

A 1:09.8943 lap in the No. 12 Verizon Team Penske Chevrolet, around the 2.439-mile Indianapolis Motor Speedway road course, was enough to do the job and bump Graham Rahal.

Late bumps dropped the Andretti Autosport pair of Ryan Hunter-Reay and Alexander Rossi out of the top 10, but until the final two or three minutes, Andretti’s full quartet was all in the top-10. Marco Andretti ended best of the bunch in eighth with Carlos Munoz in 10th, Hunter-Reay 11th and Rossi 13th in what was a much improved session for the team.

Castroneves caused one of two red flags when he stopped on course at Turn 2; the other driver to stop was Matthew Brabham in his opening Verizon IndyCar Series practice session in the No. 61 PIRTEK Team Murray Chevrolet. He lost a rear wheel and stopped at pit in. Brabham only completed three laps.

Others of note in their first session: Spencer Pigot was 12th for RLL Racing; Gabby Chaves was 16th in his first running for Dale Coyne Racing, two tenths clear of teammate Conor Daly in 20th. Brabham was 24th, behind fellow one-off entrants JR Hildebrand and Alex Tagliani.

With potentially hazardous and/or rainy weather expected later today, the first session was a busy one set under calm and clear skies with ambient temperatures of 73 degrees and track temperatures of 89, per Firestone.

Times are below with second practice set from 3 to 4:15 p.m. ET and local time. 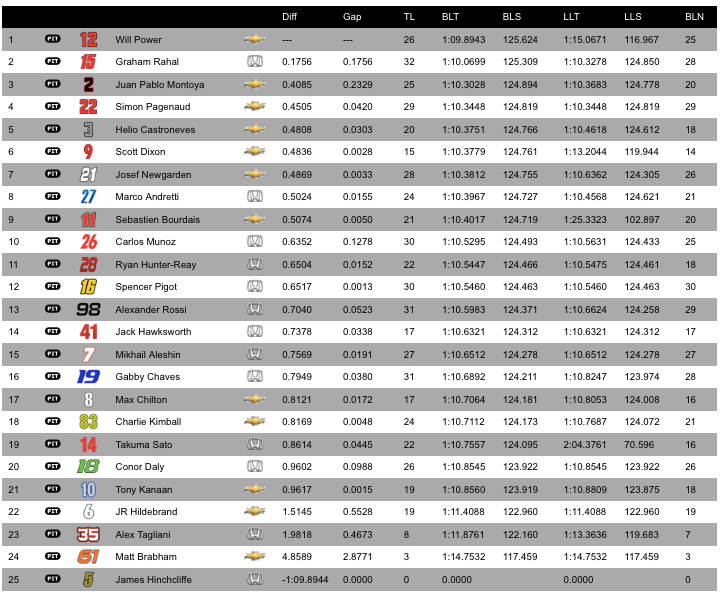