INDIANAPOLIS – Simon Pagenaud has led 36 of the first 41 laps in the 82-lap Angie’s List Grand Prix of Indianapolis, the third edition of the Verizon IndyCar Series’ road course race at the Indianapolis Motor Speedway, but he won’t lead at Lap 41 following the second full-course caution of the race.

That honor will fall to Helio Castroneves, who pitted just before the yellow and then leapfrogged the field once they pitted in his No. 3 hum by Verizon Team Penske Chevrolet. Same story was true for Conor Daly, in the No. 18 Jonathan Byrd’s Hospitality Honda, who moved up to second.

During the second pit sequence, James Hinchcliffe moved around Pagenaud on the stops, thanks to quick work from his No. 5 Arrow Schmidt Peterson Motorsports Honda team.

The second yellow flew for a couple reasons. Sebastien Bourdais stalled on course in the No. 11 Team EUROPA – KVSH Chevrolet at Turn 2, then JR Hildebrand stopped out of fuel on driver’s left on the run to Turn 7 in the No. 6 Preferred Freezer Fuzzy’s Vodka Chevrolet. Additionally, the Holmatro Safety Team removed some loose signage exiting Turn 14.

The polesitter and driver of the No. 22 Menards Team Penske Chevrolet controlled the race until the first pit sequence, then emerged behind second-starting Charlie Kimball in the No. 83 Tresiba Chevrolet once Kimball completed his stop after running longer on the first sequence.

Pagenaud proceeded to blow by Kimball on the backstraight into Turn 7 on the outside once Kimball came out, which was for second at the time behind Graham Rahal but the net lead overall.

Rahal, who started 24th, led two laps and made it up to eighth by the halfway mark in the No. 15 Steak ‘n Shake Rahal Letterman Lanigan with Theodore Racing Honda. He’s been fighting a cold all weekend and was one of two drivers to get bounced in post-qualifying technical inspection.

The other big movers of the first half have been Alexander Rossi, who’s starred early in the No. 98 Castrol Edge/Curb Honda and ran as high as sixth, and Spencer Pigot, in the No. 16 RLL/Mi-Jack/Manitowoc Honda, who made it into the top 10.

Rossi pressured Will Power into a lazy spin at Turn 7 that dropped the driver of the No. 12 Verizon Team Penske Chevrolet and defending race winner down to 23rd; fellow rookie Matthew Brabham in the No. 61 PIRTEK Team Murray Chevrolet also passed Power for position on course.

The opening turn saw chaos as it usually does here with Scott Dixon moving in the middle of the track, then Tony Kanaan merged up the lane into Bourdais. It caused a multiple-lap caution. Kanaan was done on the spot while Bourdais resumed, albeit many laps down.

Here’s the halfway order below: 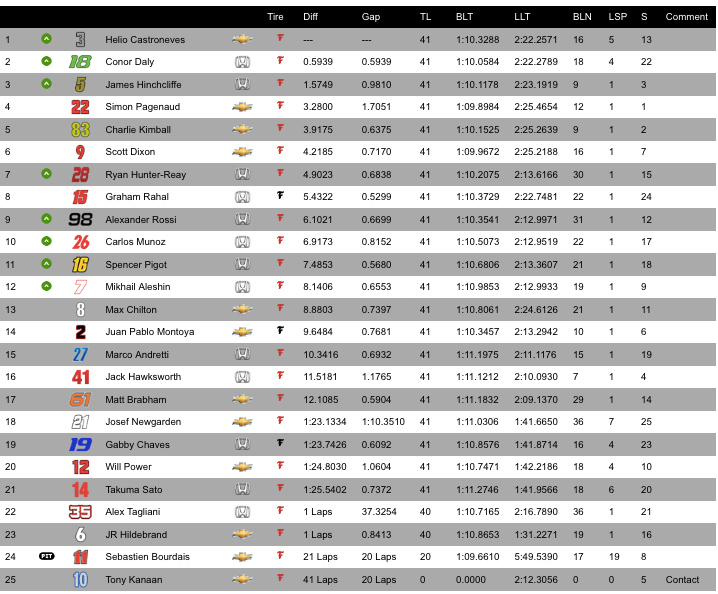