First up is the rookie orientation and refresher programs, which run from 12 to 2 p.m.

The five rookies entered – Max Chilton and Alexander Rossi plus Spencer Pigot, Matthew Brabham and Stefan Wilson – will have to complete three phases of running once on track:

Servia, Tagliani and Hildebrand have a start apiece this year while the other four drivers will make their first laps in an IndyCar since last May.

It’s already warmed up from the high 30s ambient temperature to the low 50s, with a projected high of 64 degrees ambient this afternoon.

10:50 a.m.: One new number and one new livery to report on, as well as a formal unveil of the Indianapolis 500 entry list.

Formal confirmation has come of Charlie Kimball’s new number, 42, for the rest of the month of May. Kimball was joined by Kyle Larson, who among other things teased Chip Ganassi about wanting to run the Indianapolis 500 someday but said he’d have needed Ganassi to ask about it first. More here from NASCAR TALK. 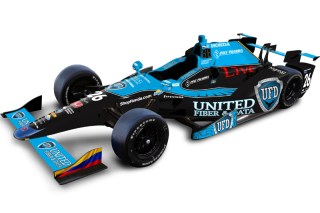 Meanwhile Carlos Munoz is another in the new livery department, with United Fiber & Data set to serve as primary sponsor of his No. 26 Honda at Andretti Autosport. From a release: “Music and fast cars go hand-in-hand and nothing says rock n’ roll more than the Indy 500,” said multi-platinum guitarist Chad Taylor of the band LIVE. “It’s going to be fun to see what Carlos can do, he’s proven to be a strong competitor on ovals, and having already won an Indy 500 ring with Ryan Hunter Reay… I’m thirsty for some more milk. No doubt this sport is addictive and having the band LIVE on the car is an honor.”

2:10 p.m.: The first couple hours of practice are over, with rookie orientation and refresher programs underway and 505 laps completed.

Chilton, Rossi and Pigot completed all three phases of ROP, with Wilson and Brabham completing the first two phases.

Brabham’s No. 61 PIRTEK Team Murray Chevrolet was delayed going out until 90 minutes into the session with the crew back working on the car in Gasoline Alley. The time was extended to allow Brabham to complete the second phase.

Townsend Bell in the No. 29 California Pizza Kitchen/Robert Graham Honda for Andretti Autosport posted the best speed of the first two hours at 224.179 mph.

Others besides Bell who participated in the refresher portion of the program included Bryan Clauson, Sage Karam, JR Hildebrand and Oriol Servia.

Helio Castroneves attempted an installation lap of his own but slowed on the front straight, which brought out the only five minutes of yellow flag time during the session.

Here were speeds after the first two hours of practice.