INDIANAPOLIS – The first run through of qualifying is complete, with 30 of the 33 drivers taking times before drivers and teams opt to run to try to get into the Fast Nine Shootout.

NBCSN IndyCar analyst Townsend Bell leads the session as it goes, with a best four-lap average of 230.452 mph in the No. 29 California Pizza Kitchen/Robert Graham Honda for Andretti Autosport.

While Bell was pleased, he was still frustrated that he didn’t extract the maximum from his car over the stint.

“All I could think about is what I could have done better,” Bell told Kevin Lee of IndyCar Radio (both are on NBCSN’s IndyCar telecasts).

“With the way the wind is blowing, it made Turns 1 and 3 a lot different. I wasn’t expecting how much I had to adjust the car. We’ll be prepared to (go again). If the wind dies down later. I wish I could have pieced things together better on Lap 3 and 4.”

Bell’s time pipped Josef Newgarden in the No. 21 Preferred Freezer Chevrolet, who qualified for the first time in a higher downforce setting with extra winglets on both the left and right rear wheel pod. Newgarden’s average was 230.229 mph.

The remainder of the Fast Nine before the final two hours are Oriol Servia, Helio Castroneves, Will Power and Marco Andretti.

This means Andretti has got four of its five cars in – Ryan Hunter-Reay, currently 14th – is the only exception. That’s compared to two Penske, one Schmidt Peterson and one Ed Carpenter car.

An accident for Pippa Mann – with a rear wing failure – sent the driver of the No. 63 Susan G. Komen Honda for Dale Coyne Racing into the Turn 2 wall. Mann actually did a very good job to limit the damage, with only slight damage to the nose and left front suspension assembly.

However it has meant that Conor Daly’s scheduled qualifying attempt was postponed, with Daly telling the ABC broadcast that the decision was made by Coyne team manager Darren Crouser.

Team found something on Pippa's car that likely caused her spin so we're checking Conor's car before he qualifies.

The rear wing end fence failed on @PippaMann's car failed so we need to look into that before sending @ConorDaly22 out for his run.

Mann told Lee: “That could have been a lot worse going through there. We’ve been so good all month, so this is a very tough break.

“Unfortunately we had a rear wing end fence failure. That pitched the car into a kind of oversteer that wasn’t catchable. Managed to minimize the damage. Now I have my answer.

“I feel like we have a good chance of rebuilding the car. The Dale Coyne Racing crew is fantastic. But we’ll have to look at these end fences. I was very lucky, and glad to get away with that.”

With Max Chilton having crashed in pre-qualifying practice and the team preparing a backup car, he, Mann and Daly are the three drivers yet to complete a qualification attempt to round out the field of 33 at the moment.

The track will be opened for practice.

Here is the order as it stands before any further qualifying attempts: 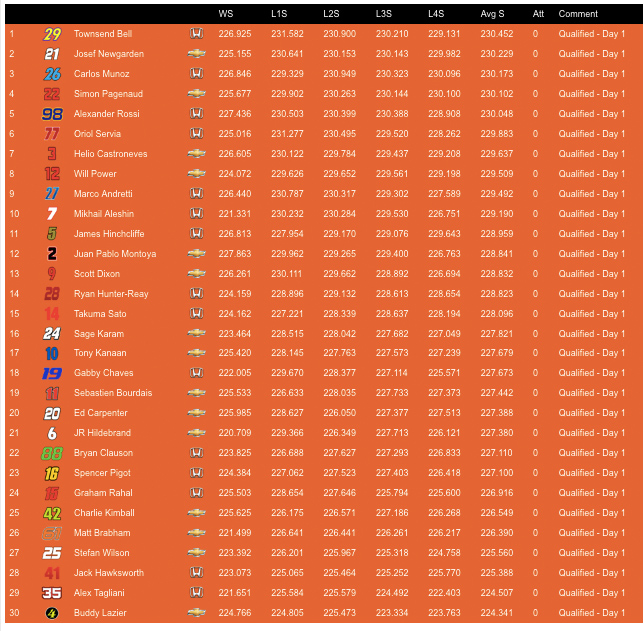