INDIANAPOLIS – Drama is striking two teams before the second and final day of qualifying for the 100th Indianapolis 500 presented by PennGrade Motor Oil.

Ganassi team manager Mike Hull told Katie Hargitt on the Indianapolis Motor Speedway P.A. system, “Our people leaped right onto the project. We had an undiagnosed engine problem this morning. Rather than take a chance for qualifying, we decided to bite the bullet and change the engine.

“Normally by sunset! It’d be heroic for our people to get it changed and back into the qualifying line, but that’s what we need to do.”

A similar thrash is occurring at Dale Coyne Racing, to fix the handling on Pippa Mann’s No. 63 Susan G. Komen Honda, which was repaired after her rear wing end fence failure during her qualifying attempt on Saturday. Mann completed six laps of installation but none at proper speed this morning.

Really tough warm up, cldn't complete lap due to issue stemming from yesterday… We'll try to fix her before qual. If not, start 33rd.

Update: we will attempt to do a qual run to see whether we have solved our issue. If not, we'll get her fixed for Monday! 👊🏻

He basically drifted it sideways through Turn 1, but caught it. Below is the save, and the subsequent crowd reaction.

Bell told Kevin Lee of IndyCar Radio (both are on NBCSN IndyCar telecasts), “It’s still difficult out there. We have a very fast race car. It’s about how much you can get away with.”

As he did on Saturday, Alexander Rossi led the final session before qualifying in the No. 98 NAPA Auto Parts/Curb Honda for Andretti Autosport.

But after getting bounced right at the end of the first day of qualifying from making the Fast Nine Shootout, the best Rossi can qualify is 10th. 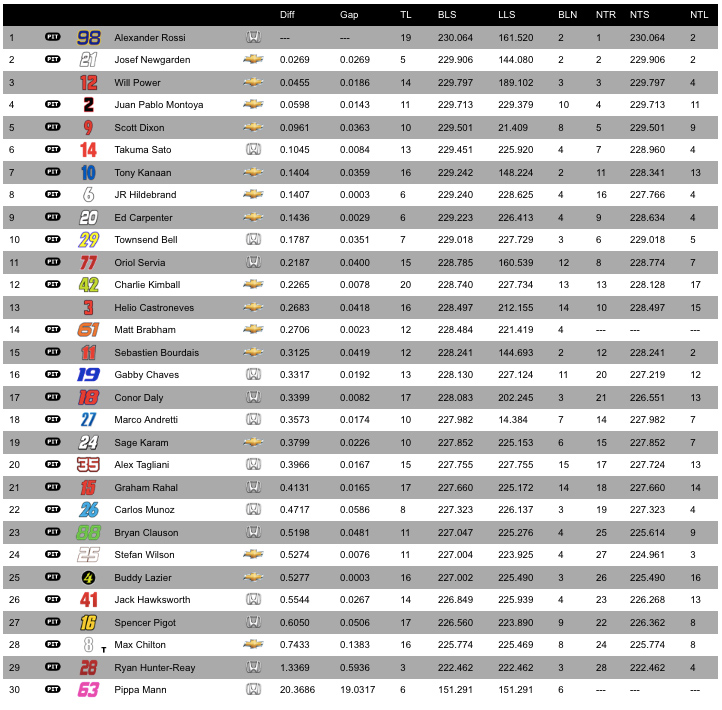