INDIANAPOLIS – James Hinchcliffe has won the pole position for the 100th Indianapolis 500 presented by PennGrade Motor Oil, following a four-lap average of 230.760 mph in the Fast Nine Shootout.

It’s a dream story with Hinchcliffe in the No. 5 Arrow Schmidt Peterson Motorsports Honda edging Josef Newgarden, who had been on the pole, in the No. 21 Preferred Freezer Chevrolet. Newagrden had clocked in at 230.700 mph.

Hinchcliffe is the second Canadian on pole for the race, the first since Alex Tagliani, also for Schmidt Peterson Motorsports, in 2011. The pole is also the first for Honda since Houston, race one, 2014, achieved by Simon Pagenaud.

It is also Hinchcliffe’s first career pole in the Verizon IndyCar Series. He’s the first driver to do that at Indy since the late Scott Brayton in 1995.

“I came into this month really hoping we’d have a new story to talk about after what happened last year and I think we did it. I can’t believe it. I’m honestly at a loss for words, which is rare for me,” Hinchcliffe told ABC’s Rick DeBruhl.

“The Arrow Electronics car was just an absolute smoke show out there. It was right on the edge. Sam Schmidt and Rick Peterson giving me this car and giving me the car to do it. … Three Schmidt Peterson cars in the top-10, that’s incredible. And now we have the best eat in the house for the 100th running of the Indianapolis 500.

“It’s crazy (that he has the chance to win). Obviously, this race is always more pressure and focus than anywhere else. And this being the 100th, there’s more tension as well. But obviously we have done something right with this team and it’s great to be able to stand here with this great group of guys.

“It’s a long race. 10 miles is one thing – you have to hold your breath for that whole thing. But 500 miles is a different deal. You have to be patient, know when to breath, when to push, when to relax. But we’ve got a good starting spot, the best starting spot and we can go from there.”

With the final run of the Fast Nine Shootout, Hinchcliffe edged Newgarden, who had a faster single lap of 231.551 mph but Hinchcliffe had the better four-lap average – by just 0.04 of a second.

It creates a remarkable story, Hinchcliffe back in the race that he missed last year due to his huge accident in practice. That being said, the performance of the team – led by engineer Allen McDonald – has been the storyline. Hinchcliffe is one of three SPM cars in the top 10 with Mikhail Aleshin in seventh and Oriol Servia in 10th.

“Unbelievable. Five years to the day that we did this with Alex Tagliani,” he told ABC’s Jon Beekhuis. “The 100th running, we’ve put effort into this since last September. It’s been an all-out team effort. My God, all three cars in the top 10. Just an incredible overall team effort. I’m almost as speechless as I was when I got out of the Corvette today. Great day.

“It doesn’t matter what the roof is, it’s what’s under the roof. And we have really, really incredible team members. Oriol is with us for just this month, he said ‘You have built the most amazing team’ and he’s been with some heavy hitters. They have a lot of heart and God Bless America, this is fantastic.”

Townsend Bell was the second of the three Andretti Autosport cars in the Fast Nine, ahead of Carlos Munoz in fifth and Will Power in sixth. Bell matches his career-best start in the race, also achieved in 2011.

With Power not even on the front row, it ends Team Penske’s pole streak this season, just as this race did last year when Scott Dixon was on pole.

The Fast Nine speeds are below:

Prior to the Fast Nine Shootout, Schmidt Peterson Motorsports also led the runners from 10-33. Oriol Servia bounced back nicely in the No. 77 Lucas Oil Special Honda, the SPM with Marotti Racing entry, after ending 24th in Saturday’s first day of running, and he’ll complete the top 10.

Servia will start alongside rookie Alexander Rossi in his No. 98 NAPA Auto Parts/Curb Honda and Takuma Sato, in his No. 14 ABC Supply Co. Honda, in Row 4.

Row 5 will feature Scott Dixon, Marco Andretti and JR Hildebrand – Dixon’s team having completed a Herculean effort to get his No. 9 Target Chip Ganassi Racing Chevrolet out for qualifying after changing its engine in just over an hour.

The most bizarre moment of Group 1 occurred for Juan Pablo Montoya, in his No. 2 Verizon Team Penske Chevrolet, after an errant trash bag found its way beneath his chassis through Turn 3. Yes, seriously, because it seems that between jet driers and trash bags, Montoya has an affinity for hitting weird objects.

The bag flew down entering Turn 3 and affected the underbody downforce and front wing of his car; Montoya’s laps were then shot in his first attempt.

INDYCAR officials granted Montoya a second run as a yellow flag for debris should have been called. On the rebound run, Montoya qualified with a 227.684 mph speed, and he’ll start 17th – two spots worse than he did last year when he won.

“(The bag) cut the front wing and scared the hell out of me,” Montoya told ABC’s Rick DeBruhl. “Something got bent on the wing. I lost the aero balance. It is what it is. We had a car to be fastest in the group.”

Montoya will be sandwiched between two more Chip Ganassi Racing entries, with Charlie Kimball and Tony Kanaan either side of him on Row 6.

Others of note in this group included all of Gabby Chaves, Max Chilton and Pippa Mann, who completed runs after not having a time stand on Saturday. Chaves and Chilton will start 21st and 22nd, Mann 25th.

Graham Rahal struggled through to 26th and was frustrated about the number of points he’ll lose. That being said, he’s come through the field here before – his best Indy finish of third in 2011 came after starting 29th.

“It really caught me off guard because (the spin) really happened late into the corner – like almost at the exit of Turn 4. I was really almost at the straightaway and that’s why I got caught because normally when I get loose early on I have a chance to catch it,” he said. 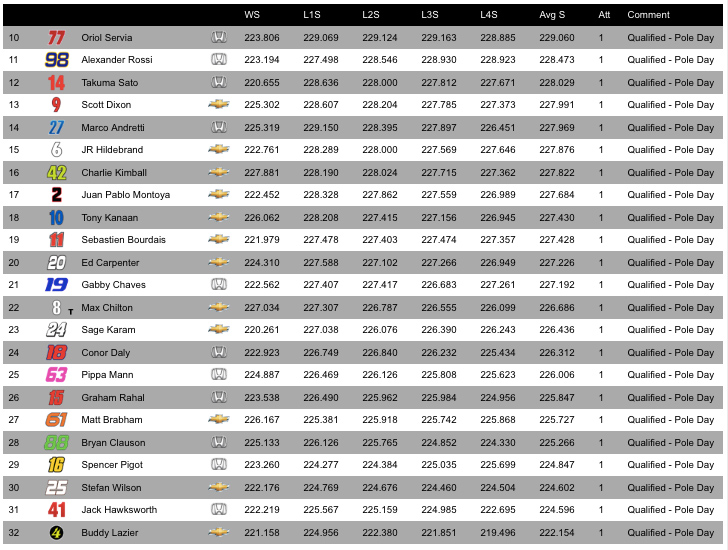