INDIANAPOLIS – Sunday is race day for the 100th Indianapolis 500 presented by PennGrade Motor Oil, but today may as well have been a warm-up act following one of the craziest days of practice in recent memory.

Josef Newgarden led the day’s running in the No. 21 Preferred Freezer Chevrolet at 227.414, ahead of three other Chevrolets – Tony Kanaan, Scott Dixon and Sage Karam.

“I think today is the most representative day that we’re going to get going into Sunday, which was great,” Newgarden said in the post-practice press conferences. “Everyone was in a pack together, which was great, because that’s what we need to see. Everyone needed to see what’s going to happen in a pack.

In fifth place, Pippa Mann turned her first practice laps since her qualifying attempt in the No. 63 Susan G. Komen Honda and was the top Honda at 225.833 mph.

Jack Hawksworth had a fire out the back of his No. 41 ABC Supply Co. Honda, and it was the third mechanical issue of the month for Honda.

In another Foyt car, Alex Tagliani made it out in a “Franken car,” either Hawksworth or Takuma Sato’s backup car, following his accident in qualifying.

Forgetting the times, in the 2,886 laps completed, it was just an insane amount of action with trains, passing, repassing and near-misses. 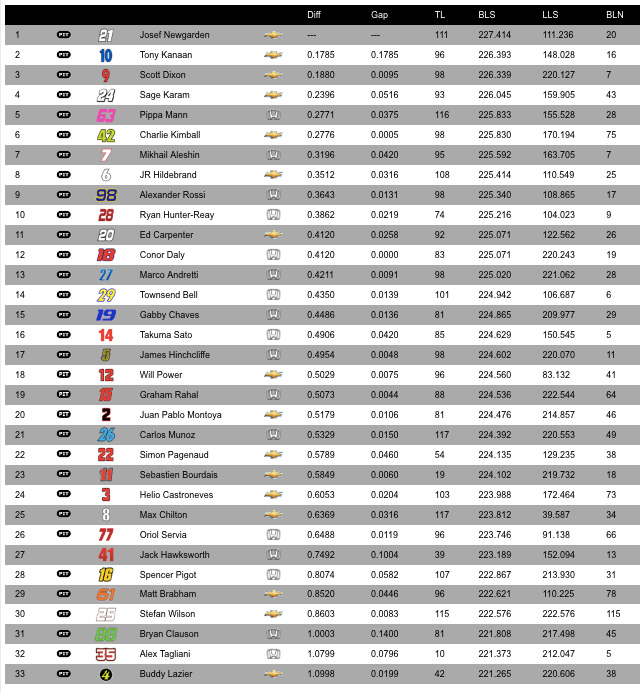