You saw the new Tatuus USF-17 chassis get unveiled this morning at the Indianapolis Motor Speedway. Now meet the first driver.

Dutchman Rinus VK (Van Kalmthout) will step into the Cooper Tires USF2000 Championship Powered by Mazda series next year. He tested last November at Circuit of The Americas.

Dutch karting sensation Rinus VK announced today that he will be making the move to the Cooper Tires USF2000 Championship Powered by Mazda in 2017. The 15-year old made the announcement at the famous Indianapolis Motor Speedway in conjunction with the launch of the new Tatuus USF-17 car, which will be introduced for the 2017 USF2000 season. 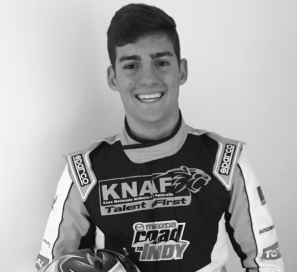 “I am so excited about coming to the U.S. and racing in USF2000 next year,” commented the teenager, who is also on Holland’s premier driver development program called KNAF Talent First. “Every time I’ve come to the U.S., I love it more and more, and I think moving to the Mazda Road to Indy is the perfect step for me. The INDYCAR ladder is definitely the right place to be.”

2017 will not only be Rinus’ first season racing in the U.S., it will also be his first season of open-wheel racing. He does however have extensive karting experience competing in the North American based U.S. Rotax Max Challenge, and also sampled two USF2000 cars last year at the Circuit of the Americas during the Chris Griffis Memorial test, where he posted the third fastest time overall.

Rinus will spend the next few months racing in the European Karting Championships, which will be followed by off-season testing in the new Tatuus USF-17, which he hopes to kick off in early October. Rinus plans to test with several teams to figure out where the best home for him will be for the 2017 season.

“I’m looking forward to starting testing,” said Rinus, who finished runner-up in both the European and U.S. Rotax Max Senior Championships last year. “I know the level next year will be very strong with the new car, so I want to test with as many teams as possible to learn about them and learn about the car.”