INDIANAPOLIS – Tony Kanaan led the way in final Carb Day practice, in the No. 10 NTT Data Chip Ganassi Racing Chevrolet, by some two mph of 226.280 mph.

Carlos Munoz was second in the No. 26 United Fiber & Data Honda for Andretti Autosport (224.772) with Scott Dixon third and Will Power and Ryan Hunter-Reay completing the top five.

Pippa Mann’s Dale Coyne Racing team will need to scramble for repairs of her No. 63 Susan G. Komen car after an accident in Turn 4.

Kanaan told NBCSN’s Jon Beekhuis: “I do that at end of every session (talk up the guys). These guys have worked so hard for so long. We worked really well in that session. I was just encouraging them to keep going, then enjoy their families for one day. We have one thing to do: we can do this.”

Hinchcliffe also got a surprise when his brother Christopher arrived in the pits.

“He surprised me in 2011. Mom wasn’t as good as hiding it back then. It was awesome to see him it’s been a while.”

Graham Rahal told NBCSN’s Katie Hargitt, after ending 14th: “I’m extremely happy with our race car. We have struggled with vibrations over a run. But this is the best race car I’ve ever had going into this. We ran pretty old tires the whole session. For our tire life, I’m pleased. We’ve got a good chance of winning this thing.”

Marco Andretti told Beekhuis: “Before this session we wrote a big sign that said don’t panic. We’re throwing a lot at it. The car felt good in the end but we had to chase the difference in conditions today. We need to make the right decision in the race.”

Lastly NBCSN IndyCar analyst Townsend Bell of Andretti Autosport, who ended ninth, told Snider: “Our car is really good. Andretti Honda is performing well and get pit stop practice in. These guys had me jump in at the deep end.” 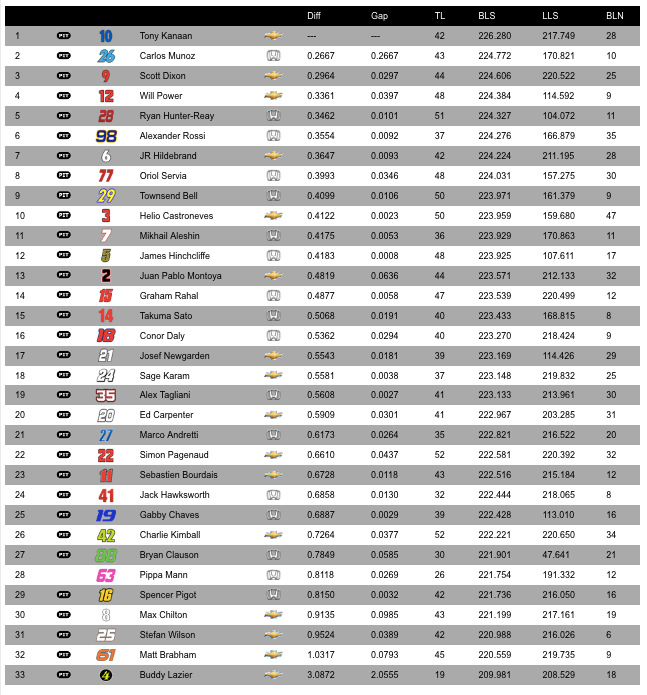