INDIANAPOLIS – In every race car driver’s life, invariably there is one race that stands out the most.

Not surprisingly, Sunday’s 100th running of the Indianapolis 500 stands out to Oriol Servia, but not necessarily for the milestone significance.

Servia truly believes that he has the best opportunity he’s ever had to conquer Indianapolis Motor Speedway. He feels he has the car (the No. 77 Lucas Oil Special Honda), the team (Schmidt Peterson Motorsports) and fate in his corner to win Sunday.

Many fans are wondering if Roger Penske will take his record 17th 500 victory, or whether Chip Ganassi will get his fifth as a team owner.

But don’t count out Schmidt Peterson, which has three of the top 10 starting positions in Sunday’s race: James Hinchcliffe on the pole, Mikhail Aleshin starts from seventh position and Servia will start 10th.

“It’s the race of the century, it really is,” Servia said. “It already is the event of the year whenever the Indy 500 happens, just because of the size of the event, the big race at Indy.

“But this year being the 100th, it’s just absolutely off the charts every day. It’s sold out and Hinch got the pole position after his bad crash last year. The whole story is just amazing, and whoever wins this year, it’s not only going to be a big deal, it’s going to change his career. 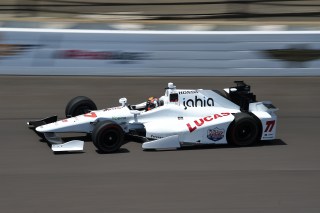 “Of course, I want to win it, of course I’m happy I have a ride with a good team. They have great talent, great engineering group and we proved it in qualifying: P1, P7 and P10. There’s still a lot of big teams behind us.”

Sunday’s race will be a one-off start for Servia with SPM, and his second race of 2016 (filled in for Will Power in the season-opening race at St. Petersburg, finished 18th).

He still remembers his first attempt at making the 500.

“The first time is one people don’t remember, but I do – it was 2002,” Servia said. “We did a one-off attempt with Walker Racing and we didn’t qualify, but I loved it (the first experience at Indy).

“I remember my first lap on the track, my eyes opened up big. I had already two years of experience in Champ Car in big power and big ovals, but there was nothing like Indy and the way it felt.

“I did a good job, but we just didn’t have the power. Then we got a car from another team, Conquest, specifically for qualifying. It had the speed, but the fuel pump broke during on my qualifying lap and that was the last attempt. Unfortunately, it wasn’t meant to be.”

Servia has made seven career starts at the 2.5-mile Brickyard – and some may be surprised to learn he actually has a very respectable overall mark there, including a fourth place finish, a sixth and three 11th showings.

He’s coming off a 29th-place finish in last year’s race, which was a career worst, having crashed just past the halfway point of the race, which gives him further incentive to bounce back in a big way in this year’s Greatest Spectacle In Racing.

It’s been a long time since he earned his first and only Indy car win back in 2005 at Montreal in the Champ Car Series. He’s still looking for his first triumph in the Verizon IndyCar Series.

A lot has happened to Servia since he first climbed into an Indy car in 2000. That’s why he’s looking at Sunday’s race as potentially being the race that may become the most unforgettable event he’s ever been part of.

“I’ve been very fortunate all my life with the career I’ve had,” Servia said. “I joke that I’ve been through 14 different IndyCar teams, which is crazy and is not what you want to have consistent results, so I’m not happy about that.

“At the same time, I’m happy because I learned a lot being with so many teams, good and bad ones, and I’m happy somehow teams kept bringing me back.

“I take that as a good thing and hopefully I can land somewhere that I call home and I can go for the championship and the wins that one day I still hope to have.”