It’s a stunning upset but an incredible run for the No. 98 NAPA Auto Parts/Curb Honda, having made it 36 laps home on fuel on the final stint of the race.

The Manor reserve driver in Formula 1 has moved to IndyCar this year for the full season, following a late move in the offseason when a sponsor fell through and sidelined Gabby Chaves.

But Rossi has been one of the pleasant surprises of the season, and his month at Indianapolis was close to flawless. He didn’t make a mistake all month, took to the track well, understood how to handle it and drove controlled all month.

The win with Herta follows up when Chaves won Rookie of the Year honors here last year with 16th place.

It might be one of the most incredible stories in Indy history… since the last time the ‘500 featured a 100 as part of its name.

The 100th anniversary race in 2011, the 95th running, saw Wheldon steal the win on the last lap – also driving for Herta – when J.R. Hildebrand crashed in Turn 4.

But this day, Rossi hung around – quietly – in the lower regions of the top 10. Although two bad pit stops owing, ironically, to fueling issues forced him as low as 29th in the field, which then prompted Herta to engage the off-sequence strategy.

Had Rossi not been able to make it home, the win could have fallen to his teammate Carlos Munoz. The driver of the No. 26 United Fiber & Data Honda was flying in the final stages but, like most of the field, needed a late race splash as the race ran green for the final 32 laps.

The same story applied for Josef Newgarden, in the No. 21 Preferred Freezer Chevrolet, who led 14 laps and was in the top three most of the race. He ended a hard luck third.

Tony Kanaan and Charlie Kimball completed the top five, both having done a great job to move up quietly from sixth row starting positions for Chip Ganassi Racing Teams.

Marco Andretti and Graham Rahal were non-factors in 13th and 14th.

Defending champion Juan Pablo Montoya was the first driver to crash out, having gone out on Lap 64. 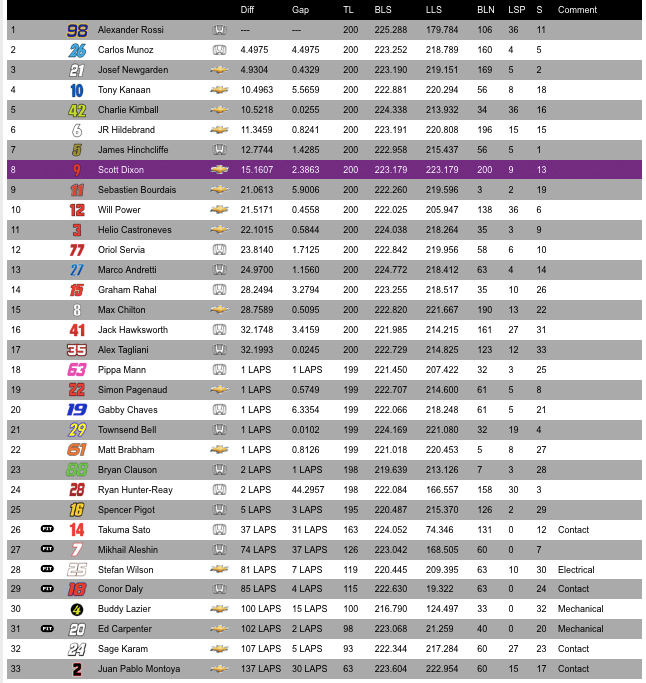