INDIANAPOLIS – Thus far the quartet of Ryan Hunter-Reay, James Hinchcliffe, Townsend Bell and Josef Newgarden have had the strongest cars in the 100th Indianapolis 500 presented by PennGrade Motor Oil.

But it’s Helio Castroneves who now leads at the 100-lap mark, as he did last year, following the fourth round of pit stops. He’s in search of his fourth Indy 500 win.

Prior to Lap 100, Bryan Clauson was out front. Clauson went a lap down early and has not made his fourth pit stop yet in the No. 88 Cancer Treatment Centers of America Honda for Dale Coyne Racing. But courtesy of a typically-cagey Coyne strategy play, he was nearly out front for this historic moment in the longest Indianapolis 500 outing of his three starts thus far.

Just prior to halfway, Sage Karam’s strong run from 23rd up to seventh came to a crashing halt in Turn 2. The driver of the No. 24 Gas Monkey Energy Chevrolet for DRR-Kingdom Racing appeared to get pinched in Turn 1 by Bell – who also made a similarly tight move on Newgarden – then hit the wall and careened through to Turn 2. 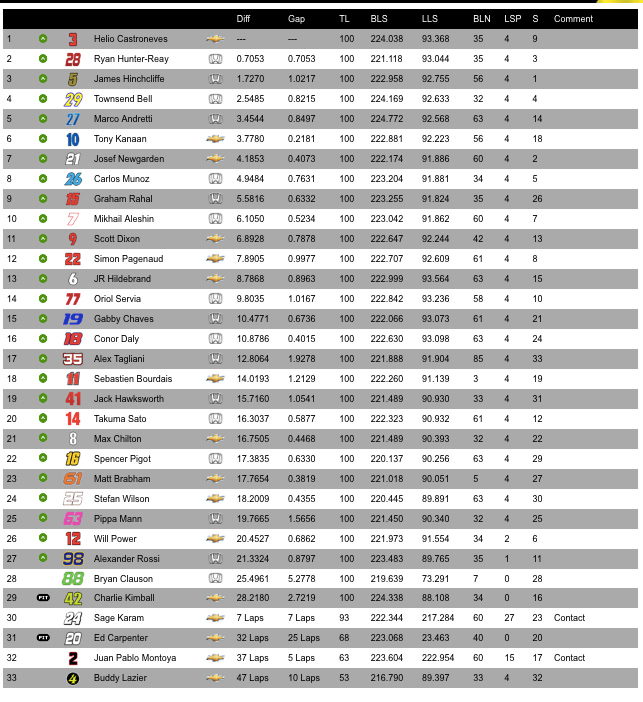