Pirelli has confirmed that it will take its three softest tire compounds – soft, super-soft and ultra-soft – to the Singapore Grand Prix in the middle of September.

Following the introduction of a fifth tire compound for the 2016 Formula 1 season – the ultra-soft – and the ability for teams to choose how many of each they take to a race, Pirelli has been announcing its allocations well in advance of each grand prix.

Although the Singapore Grand Prix will not be held until September 18, the Italian supplier has already firmed up its tire picks for the race.

The low grip nature of the Marina Bay Street Circuit makes it ideal for the new ultra-soft tire that enjoyed a successful debut in Monaco last weekend.

Here’s how Pirelli’s tire picks have gone so far this year. It is still yet to confirm its plans for Belgium or Italy, the deadline being eight weeks for European rounds and 14 for flyaways. 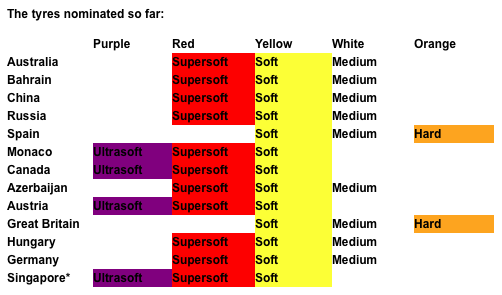