DETROIT – Sebastien Bourdais and KVSH Racing have secured their second straight win in the Chevrolet Dual in Detroit Presented by Quicken Loans, having won the second race of the doubleheader weekend last year and now doing so in the first race of the weekend on Saturday.

Although Team Penske dominated the majority of the 70-lap race, they were actually caught out today on another strategy gamble.

Entering the final 26 laps of the race, six cars, Juan Pablo Montoya, Graham Rahal, Scott Dixon, Bourdais and the Dale Coyne Racing twins of Conor Daly and Gabby Chaves went off sequence to not pit and leapfrog the leaders, with Will Power leading those who stopped. In Bourdais’ case, an earlier call from strategist and KVSH Racing team co-owner Jimmy Vasser to get him off sequence would ultimately pay dividends later on.

With the race then running under green flag conditions, that allowed those first six to move ahead, stretch their margins and secure most of the top five positions.

Daly was last to pit after leading his third race of the season but came out just behind Bourdais, after taking fuel only.

Bourdais then emerged ahead of him in the No. 11 Team Hydroxycut KVSH Racing Chevrolet and stretched the lead to a few seconds. But in traffic, Bourdais lost a bit of time which allowed Daly to catch up and get within a second in the No. 18 Jonathan Byrd’s Hospitality Honda.

The Frenchman held on though and Daly, while close, was unable to get past and ended 2.0401 seconds behind. It’s Bourdais’ 35th win of his career, tying him with Bobby Unser for sixth on the all-time win list, one ahead of Al Unser Jr.

Montoya completed the podium in third, his first podium since winning the St. Petersburg season opener.

Rahal was fourth with Helio Castroneves in fifth, and Carlos Munoz in sixth.

Simon Pagenaud ran out of fuel on the last lap and fell to 13th.

Still, the Frenchman unofficially leads the points heading into Sunday’s race with 313 points, to Castroneves at 254, Scott Dixon on 247, Munoz and Josef Newgarden on 227. Montoya and Indianapolis 500 champion Alexander Rossi are tied for sixth on 223 – Rossi ended 10th – with James Hinchcliffe on 217, Tony Kanaan on 214 and Charlie Kimball on 213. 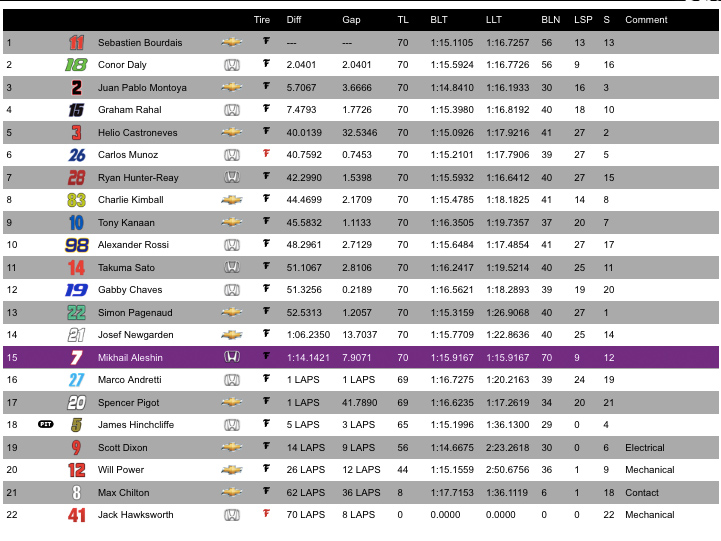