DETROIT – Will Power has ended a more than one-year winless drought in the Verizon IndyCar Series, taking his No. 12 Verizon Team Penske Chevrolet to victory in race two of the Chevrolet Dual in Detroit Presented by Quicken Loans weekend.

A pass on Lap 53 of teammate Simon Pagenaud, the polesitter in the No. 22 Hewlett Packard Enterprise Team Penske Chevrolet into Turn 3 for what was fifth place, ultimately proved the winning move as the top four drivers in front of him – Sebastien Bourdais, Charlie Kimball, Graham Rahal and Alexander Rossi – all needed to pit in the next 10 laps for a final stop.

Power last won at the 2015 Angie’s List Grand Prix of Indianapolis but extends his streak of winning at least once to a 10th consecutive season, having first won in Champ Car in 2007 before the IndyCar/Champ Car merger in 2008.

Pagenaud, after successive results outside the top 10 at the Indianapolis 500 and first race in Detroit, took a needed second place, albeit only 0.9203 of a second back. For the second straight day he led the most laps, this time 40 of the 70 laps, after leading 35 of the 70 on Saturday.

A battle of Americans took place for third, with Ryan Hunter-Reay edging Josef Newgarden for the final podium position.

Scott Dixon was fifth after a crazy day with two contact incidents with Conor Daly, who started 21st, climbing to sixth and his second top-10 result in as many days. Daly though was admittedly peeved after a penalty assessed to him in qualifying, which knocked him out of a potential third row starting position.

A couple incidents defined the race. The first was a several-car incident on the opening lap, which took James Hinchcliffe and Max Chilton out of the race and put Takuma Sato behind the eight ball with contact.

A further accident occurred on Lap 35 when Juan Pablo Montoya made a rare error and crashed out of the race at Turn 10.

Once a final caution flew for Jack Hawksworth stopped on course at Lap 50, that set the stage for the final run to the finish, with those drivers who pitted just before the yellow in better position than those who didn’t.

Helio Castroneves was among those caught out, and the driver who was leading with less than 20 to go wound up falling back to 14th place as a result.

Pagenaud’s points lead, which was already 59 points coming into the race, is now stretched to 80 over Dixon. Castroneves is third with Americans Newgarden and Alexander Rossi fourth and fifth in points. 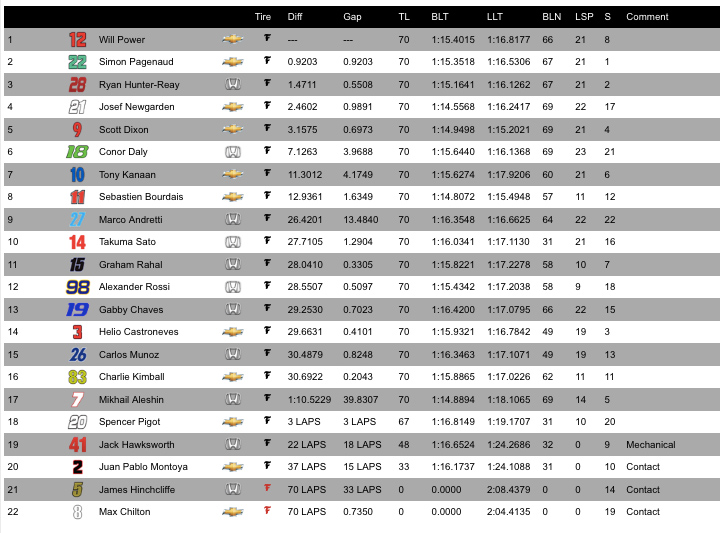