There wasn’t a ton of running in the opening 75-minute practice session for the Verizon IndyCar Series’ Firestone 600 – drivers completed anywhere from 17 to 53 laps – and Chip Ganassi Racing Teams ended 1-2 on the top of the timesheets.

Kanaan said there’s not much you can really read into this session, run with high ambient and track temperatures in the high 80s and mid-110s, respectively.

“Honestly qualifying is such a lottery (starting last) might happen,” Kanaan told NBCSN’s Robin Miller. “We have a decent car for the race.

“It was a messy session for everyone. Lot of yellows. We never did a qualifying run because we were in traffic. Track was quite hot. We had a pretty good plan and split the workload between the four cars. Qualifying will be a lottery. But I’m looking forward to tonight.”

Two more Chevrolets – Josef Newgarden in the electric green No. 21 Fuzzy’s Vodka Chevrolet and Charlie Kimball in the No. 83 Tresiba Chevrolet – were next up before the fastest Honda of Marco Andretti in fifth, the No. 27 Snapple Honda.

Andretti Autosport drivers clocked in fifth, sixth and seventh with Andretti ahead of Carlos Munoz and Alexander Rossi, who were second and first in the most recent oval race at the Indianapolis 500.

It was a somewhat chaotic session as Kanaan noted.

Gabby Chaves crashed, Graham Rahal stopped on track with a gearbox issue, then James Hinchcliffe said his team needed to fix something in the garage area, not on pit lane. There was also debris on track from a cut tire which caused an extended yellow flag period.

Difficult first session. Car felt ok, but we had a gearbox failure. Unfortunately cut our session short after only a few laps. Qual up next!

All told the planned 75-minute session was extended five extra minutes owing to the yellows.

Times are below. Qualifying airs on a slight delay at 6 p.m. ET on NBCSN. 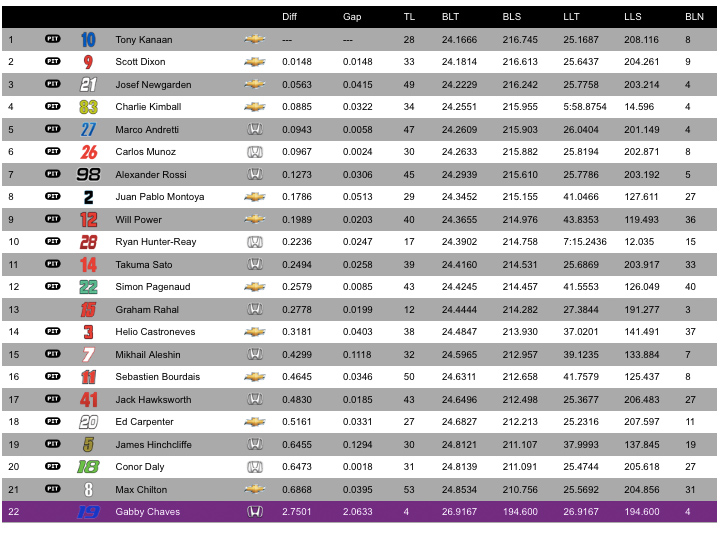