FORT WORTH – The Firestone 600 at Texas Motor Speedway has been red flagged for rain on Lap 71 due to rain.

The race currently lists James Hinchcliffe as the leader ahead of Ryan Hunter-Reay, Mikhail Aleshin, Will Power and Ed Carpenter.

Carlos Munoz has led 37 laps after starting on the pole.

The race was under caution from Lap 43 to Lap 71 after a hard crash involving Josef Newgarden and Conor Daly.

Newgarden has been taken by air to Parkland Memorial Hospital for evaluation of his right shoulder and right hand.

The race was originally set to start Saturday night at 7:40 p.m. ET, but struggles to dry the track forced it to Sunday.

A further update came from INDYCAR president of competition and operations, Jay Frye, to CNBC. Frye reiterated the desire to get the race at least to halfway tonight:

“Obviously we worked to where we were. The sky’s clearing and getting brighter. We’ll see what we can do for tonight.

“We fought the humidity last night. Today not as hot as humid. We’re not halfway yet so it’s not a complete race. Restart at some point, hopefully tonight.

“We need to make every attempt to get the race in tonight. We started at 5 p.m. last night. It’s not 5 p.m. yet. We’ll give it our best shot.

Frye also said he thought the safety and car did what it supposed to do in Josef Newgarden’s earlier accident with Conor Daly.

“Safety is number one concern with our competitors. The car did what it was supposed to do. SAFER barriers did what they were supposed to do. He was alert, conscious, he appears to be in good shape.”

Check back for more. 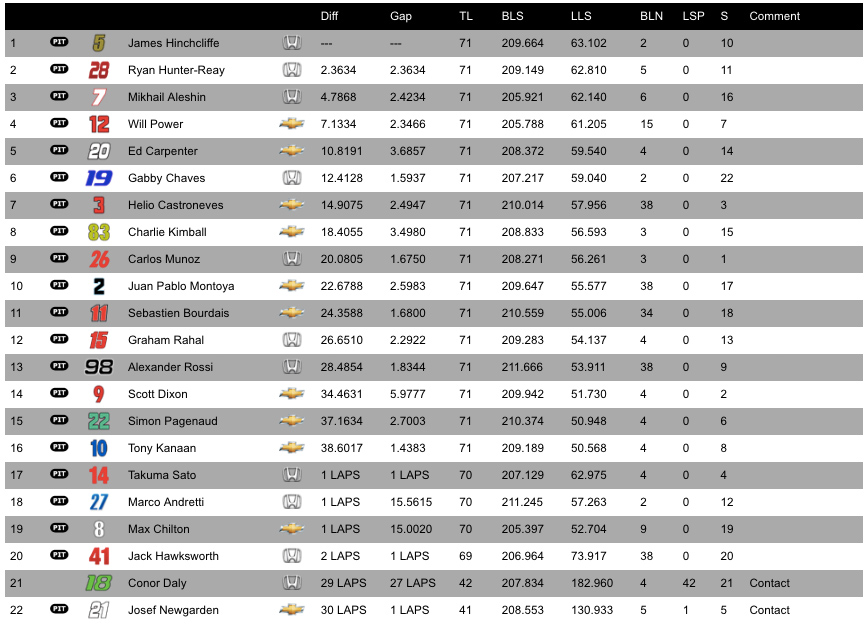