ELKHART LAKE, Wis. – Simon Pagenaud is back at a track he knows well from not only his early North American open-wheel days but where he’s had a lot of success in sports cars, and subsequently topped the charts in the Verizon IndyCar Series’ return to Road America for this weekend’s KOHLER Grand Prix (Sunday, 12:30 p.m., NBCSN).

Pagenaud led the 75-minute first practice in the bright fluorescent yellow No. 22 Menards Team Penske Chevrolet with a best time of 1:43.4804.

Times weren’t entirely representative of potential pace yet this weekend with longer runs happening and on Firestone’s black primary tires; the compound used this weekend is the same as at the Angie’s List Grand Prix of Indianapolis earlier this year and at the Mid-Ohio Sports Car Course last year.

Two Honda runners were next in track rookie Carlos Munoz, the Texas polesitter, in the No. 26 Andretti Autosport Honda ahead of Jack Hawksworth in the No. 41 ABC Supply Co. Honda. Hawksworth has raced at Road America in an RSR Racing-entered Prototype Challenge car in the past.

Scott Dixon and Tony Kanaan were next in a pair of Chip Ganassi Racing Teams Chevrolets to complete the top five.

Dixon, in the newly yellow Clorox-supported No. 9 car this week, continues his week of racing after Le Mans and Watkins Glen by heading to Road America with Kanaan third in the usual No. 10 NTT Data Chip Ganassi Racing Chevrolet. Both drivers last raced at Road America in IndyCar in the 2002 CART race.

Of note, Graham Rahal in another yellow car, the No. 15 Gehl/D-A Lubricant Honda, resumed after missing most of the session owing to early electronic issues. The Rahal Letterman Lanigan Racing crew fixed the car to get him back on track.

Additionally, in his first session back after his Texas accident, Josef Newgarden resumed on track in the No. 21 Direct Supply Chevrolet for Ed Carpenter Racing with his injured collarbone and hand. Per NBCSN’s Marty Snider and team owner Carpenter, it was the hand more than the collarbone that hurt, but he completed 15 laps in the session (60 miles) and was 10th overall.

Temperatures started at 75 degrees ambient and 96 on track before climbing to 76 and 104 later in the session, both per Firestone.

There were a number of spins in the session with Kanaan spinning at Turn 6, Mikhail Aleshin and Juan Pablo Montoya at Turn 12 and James Hinchcliffe at Turn 14, but all resumed without incident. 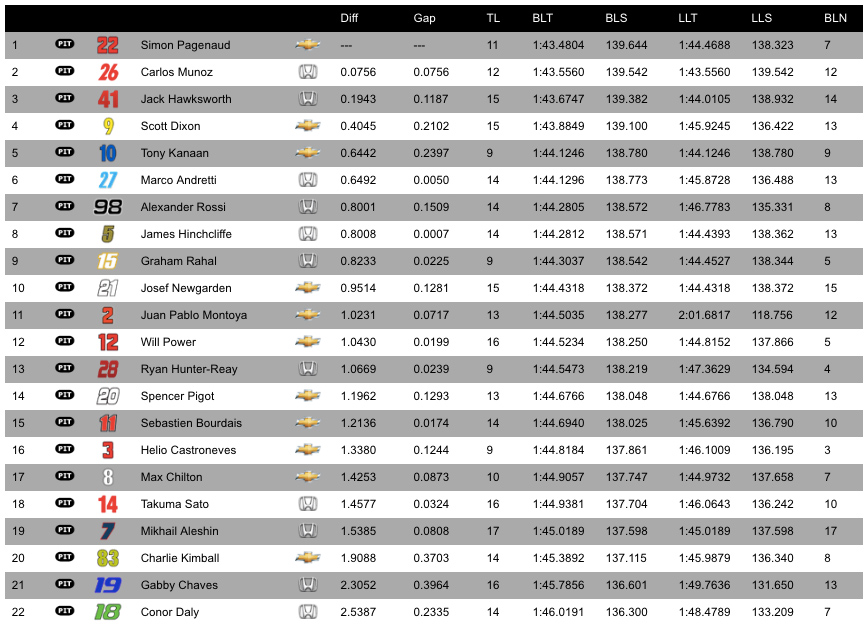