The driver of the No. 12 Verizon Team Penske Chevrolet didn’t set a new track record as he often does in IndyCar qualifying sessions, but with a best time of 1:42.2105 on Firestone’s red alternate tires he was the quickest in the Firestone Fast Six sessions.

It’s his second pole of the year but first he figures to actually start first from. He had the pole in the Firestone Grand Prix of St. Petersburg but didn’t start the race because of an inner ear infection, which ruled him out of competition before Oriol Servia filled in.

It was a Team Penske and Chip Ganassi Racing Teams dominated Fast Six session, with the top five Chevrolet runners before Graham Rahal led the Honda efforts in P6.

Of note elsewhere in the grid, Max Chilton (seventh) and Conor Daly (ninth) have season and career-best starting positions.

Carlos Munoz got a new engine in his No. 26 Andretti Autosport Honda and made it back out into 10th.

The two other drivers besides Dixon who are back from Le Mans – Sebastien Bourdais and Mikhail Aleshin – will start 12th and 13th.

Josef Newgarden spun in his session, calling it his own mistake, and caused a red flag. He’ll start 20th as he presses ahead two weeks after his collarbone and hand injuries.

James Hinchcliffe also lost his two fastest laps for qualifying interference and was diplomatically frustrated in an IndyCar Radio interview. 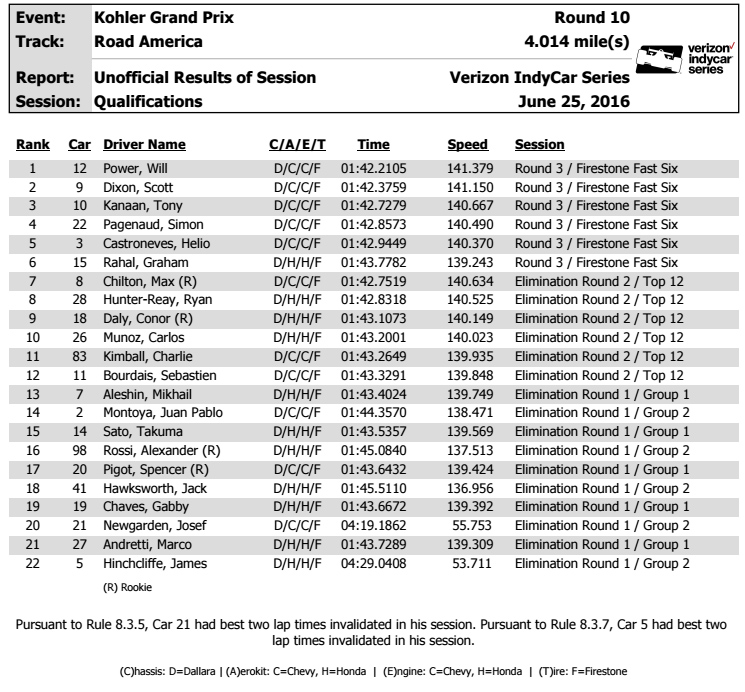