ELKHART LAKE, Wis. – At a weekend that brought memories of nostalgia in the Verizon IndyCar Series’ return to Road America for the first time since 2007, there were memories of domination past out front.

All day and all weekend belonged to Will Power in the No. 12 Verizon Team Penske Chevrolet.

In a vintage virtuoso Power performance, the Australian led 46 of 50 laps in the KOHLER Grand Prix to secure his 27th career victory and second in a row, after also winning the second race in Detroit three weeks ago.

Points leader Simon Pagenaud was poised to finish second before Tony Kanaan, who put up a great weekend of his own in the No. 10 NTT Data Chip Ganassi Racing Chevrolet, passed him on Lap 47.

Kanaan then put on a clinic in the final few laps to close up on Firestone reds while Power was on blacks, but despite getting within 0.4 of a second on Lap 49, he fell back to 0.7249 of a second back on the final lap.

“TK he had the reds on, and he was coming ahead. He was quick all race,” Power told NBCSN in Victory Lane. “I had my work cut out but I just did everything I could to stay ahead. So stoked to get the Verizon car in victory lane. Thanks to Chevy, phenomenal car, phenomenal engine. Man, we won. So stoked!

“It’s just a great place, just so stoked to win in that way. I was so stoked. I badly wanted to win another race. I needed that one.”

Kanaan was excited for both the weekend and his race, although frustrated to come up short of his first win since 2014.

Graham Rahal also got past in the No. 15 Gehl/D-A Lubricant Honda for Rahal Letterman Lanigan Racing for third. Kanaan and Rahal had a huge moment earlier in the race when Kanaan moved to avoid hitting Rahal, who merged out into the fast lane of the race track into Turn 1, and Kanaan swept past on the inside anyway.

Ryan Hunter-Reay and Helio Castroneves completed the top five, after Pagenaud started slipping down the order. The likely engine issue resigned the series points leader to a 13th place finish.

Two other Ganassi cars had issues; Scott Dixon was first out with an engine issue, and Max Chilton ran out of fuel prior to a pit stop.

Arguably the hardest luck driver of the day was Conor Daly, who was poised for another top-10 for Dale Coyne Racing. But on Lap 40, Daly had an apparent left rear suspension break that led to a crash out in Turn 1.

The culprit. Left rear lower wishbone. Not optimal for race continuation, hah! We shall get back to work in Iowa 👍 pic.twitter.com/jmE9kAIEWr

He had ran in the top six most of the race.

Unofficially Pagenaud leads Castroneves by 74 points after the race. The series heads to Iowa Speedway on July 10. 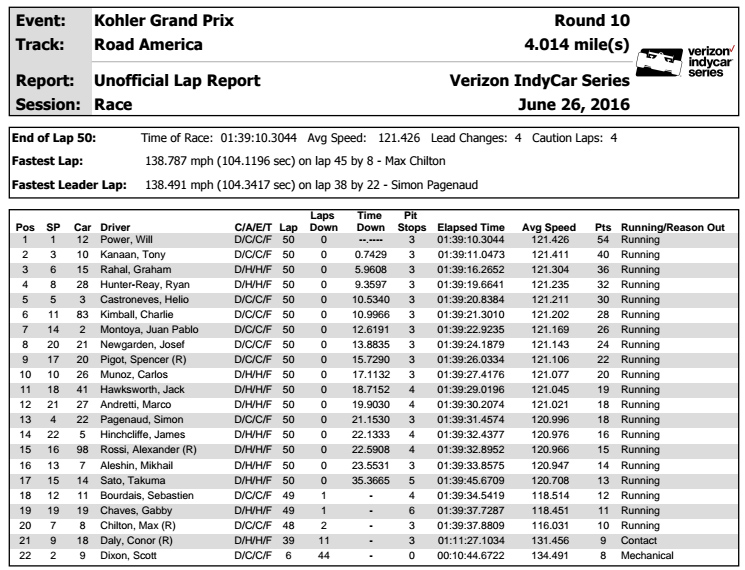