A freshly repaved surface and a crazy stretch of action greet the IMSA WeatherTech SportsCar Championship upon its trip to Watkins Glen International this weekend for the Sahlen’s Six Hours of the Glen.

It was a five month and $12 million project, but “The Glen” is as smooth as a billiard table and lightning fast for the third round of IMSA’s Tequila Patron North American Endurance Cup – and the first race since the Mobil 1 Twelve Hours of Sebring in March where all four of its classes will be competing in the same race at the same time.

Meanwhile the six-hour race kicks off a stretch of three races in four weeks, and also four in six, through the first full weekend of August. This is Round 6 for the prototype classes, Round 5 for the GT classes, before Canadian Tire Motorsport Park next week, Lime Rock Park on July 23 (no Prototype) and Road America on August 7.

“Michael Printup and his team have done an excellent job with the repaving of Watkins Glen,” said Travis Roffler, director of marketing for Continental Tire. “We had an excellent test in May and tire wear looked really good. In fact, it wouldn’t be surprising to see a couple track records set this weekend. We think the drivers are going to have fun and the fans are going to see some extremely competitive racing. It’s going to be a great race weekend!”

“The new surface is amazing,” added Ryan Dalziel, driver of the No. 90 Visit Florida Racing Corvette DP. “It’s been a long time since I’ve driven on a new surface so good. I have to commend Watkins Glen on improving an already perfect race track.”

Dalziel isn’t quite in the championship fight – he missed a race per his FIA World Endurance Championship commitments – but is no doubt keen to win his first race of the year co-driving with Marc Goossens at a track where the No. 90 car has won the last two years, with Richard Westbrook and Michael Valiante.

The pair of Corvette DPs that do lead the title fight, with Christian Fittipaldi and Joao Barbosa (No. 5 Action Express Racing) and Jordan and Ricky Taylor (No. 10 Wayne Taylor Racing) are tied on 151 points, and the Dane Cameron/Eric Curran pairing in the No. 31 Whelen Engineering-backed AXR entry is just four back.

Yet while those cars have the top-end pace, they lack the sophisticated aero that suits most of the other cars in class. The Watkins Glen track is one of several that should favor LMP2-spec cars, and as such, the pair of Ligier JS P2 Hondas from Michael Shank Racing and Tequila Patron ESM and the pair of Mazda Prototypes should put up a tough fight. The Mazdas run in a tribute livery to commemorate its 25th anniversary of its 1991 win at the 24 Hours of Le Mans.

The DeltaWing should be fast as well and hopes to have the reliability to match, with the Highway to Help DP rounding out the class field.

Starworks Motorsport finally broke through in Detroit for its first win of the year with Renger van der Zande and Alex Popow in the team’s No. 8 Oreca FLM09, which moves them into the points lead over the PR1/Mathiasen Motorsports pairing of Tom Kimber-Smith and Robert Alon, the Mazda Raceway Laguna Seca winners. JDC/Miller Motorsports had a thrash to even make Detroit and the pair of Stephen Simpson and Misha Goikhberg look to bounce back this weekend; it’s been a tough-ish season for several-time champions CORE autosport, and Colin Braun and Jon Bennett will look to win their second enduro of the year (Sebring).

The star attractions from this year’s 24 Hours of Le Mans come home this weekend to the GTLM (GTE-Pro at Le Mans) class for what will be the class’ first race in more than two months.

Ford enters as favorites and with the spoils of Le Mans glory in their back pocket. Joey Hand and Dirk Mueller now have the chance to come home and win at the Glen after winning two weeks ago at Le Mans.

It’s the No. 4 Corvette pair though of Oliver Gavin and Tommy Milner that lead the points by 12 over Long Beach rivals Porsche, the pair in the No. 912 of Earl Bamber and Fred Makowiecki having likely given them nightmares since “Mako” dumped Milner in the final hairpin. Gavin and Milner won Daytona and Sebring though and look for a third win in the TPNAEC this weekend.

Ferrari is also keen to impress with Risi Competizione also having starred at Le Mans, while Scuderia Corsa continues again with its GTLM entry.

BMW struggled on Michelin’s new tires at Mazda Raceway, as did Corvette, and both manufacturers will look to be better suited this weekend. Highlighting the weekend for BMW Team RLL is a Team PTG throwback scheme on the No. 25 M6 GTLM driven by Dirk Werner and Bill Auberlen.

Consistency as well as a win at Sebring have Scuderia Corsa’s pair of Christina Nielsen and Alessandro Balzan ahead in the GTD points with their No. 63 Ferrari 488 GT3. They’re up by eight over the No. 23 The Heart of Racing Porsche 911 GT3 R pairing of Mario Farnbacher and Alex Riberas, who dominated at Mazda Raceway Laguna Seca.

Both drivers have third drivers this race in Jeff Segal, who won Le Mans in GTE-Am with the team, and Ian James – and both bolster their lineups.

Bryan Sellers gets a chance to defend a Watkins Glen win but in another class in his No. 48 Paul Miller Racing Lamborghini Huracán GT3 he shares with Madison Snow. He won GTLM last year in what was Falken Tire’s last IMSA win and will now look to deliver Lamborghini its first IMSA triumph, after securing the manufacturer’s first pole at Detroit.

Audi’s hopes are carried by the eternally humorous Magnus Racing, which won Daytona, as well as Stevenson Motorsports, which have been close but not yet made it to the podium with its new R8 LMS.

An endurance-only entry, the No. 93 Viper, won this class last year which leaves the race wide open among the remaining entrants. The No. 33 Gas Monkey Energy Viper for Riley Motorsports (Jeroen Bleekemolen, Ben Keating) looks for two in a row after winning Detroit to kick off the month of June.

Beyond the WeatherTech Championship, there’s also eight other races on the schedule:

All of those are complete by Saturday before the WeatherTech race on Sunday. 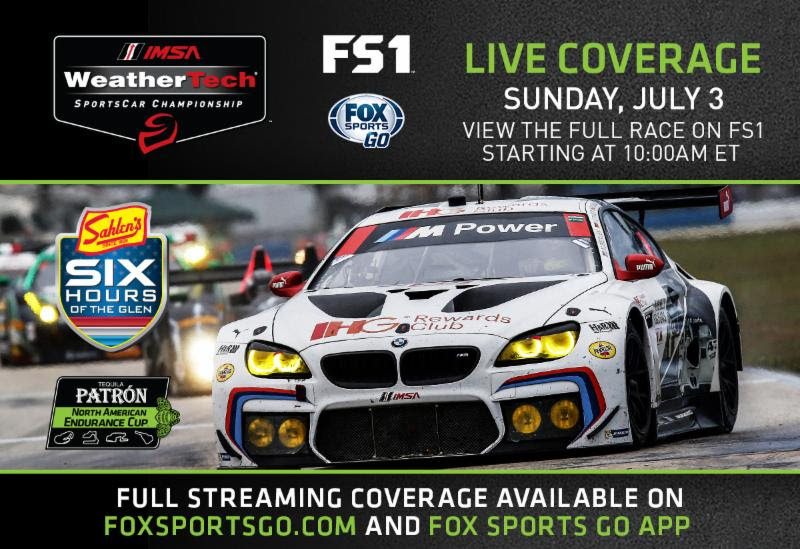