One of the elements that made Josef Newgarden’s Road America weekend busier than a normal one was the fact his children’s book – “Josef, the Indy Car Driver” launched during the weekend.

Newgarden, driver of the No. 21 Direct Supply Chevrolet for Ed Carpenter Racing in the Verizon IndyCar Series is the subject and featured driver in the book, written and illustrated by Chris Workman.

Workman is the owner of Apex Legends, a content creation and publishing company that looks to find and create the next generation of race fans. NBCSN lead F1 and IndyCar announcer Leigh Diffey has written the foreword.

The hardcover picture book is available via ApexLegends.com/store and Amazon. A donation to Racing for Kids will occur for every book sold at the store.

We caught up with Workman at Road America. Here’s his thoughts on the creative process as the book launched: 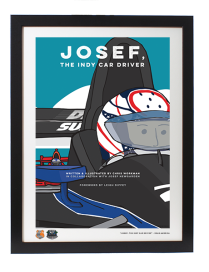 NBCSports.com: What was the buildup process to getting the book created and launched?

Chris Workman: “We’d done an IndieGoGo campaign last fall, and that was to get some interest around the book, get some pre-sale and so forth. This is the official launch, this weekend.”

NBC: Of course now to premiere it here after what’s happened the last couple weeks (Newgarden’s accident at Texas and pressing on through the pain) has to be a bit surreal!

CW: “It’s been an interesting couple of weeks. I was watching via timing & scoring and saw him drop to 22nd, quickly went to Twitter and we thought, well this is unreal. I’ve been in contact with him a little bit, but his big focus was getting ready.

“When I heard he was going to be here, it was just amazing.”

NBC: What was the idea behind the book? Was this your idea? His?

CW: “It was my idea I brought to him. My first book was on Le Mans in the ’60s, so I wanted to do something more modern and current, and just look at the overall landscape of drivers in IndyCar, Josef immediately came to mind. He won Alabama last year.

“So I began to approach him about the concept, and he was immediately on board. He saw it as something different, as a unique way to get fans engaged and educated.

“I chose Road America. I was going to do Alabama – Barber – or Toronto initially because he won there. But once Road America got back on the schedule it was like coming home. It was the first race I ever went to. I grew up in Milwaukee. It’s very personal to me to tell the story for kids getting excited and motivated about racing here, because you couldn’t tell the story at a cooler track when all was said and done! All the stars aligned.”

NBC: We get to see Josef in a team dynamic on a regular basis. How was he to work with for you? What was the feedback and process between you two?

CW: “He was primarily like, ‘I like what you are doing, and I want to respect your creative process.’ So run stuff by him and his manager. ‘Hey guys is this correct?’ But for the most part Josef was relatively hands off on the formation of the story. He immediately bought into the idea of his telling about how he became a driver, because he wants to help other kids realize the path of going from – in his case, a motorized scooter – all the way from racing in his neighborhood to becoming a racing driver. We wanted it to be attainable. There’s two parts about his career, then the race, then join it together.”

NBC: Does Josef work because he’s one of the drivers sellable and appealable to the next generation?

CW: “The biggest challenge for the book was trying to make it current so the fans can recognize it and see turn on TV, and see similar to what’s in the books, with legs. It’s funny to see how the paint schemes have turned up, how they actually are versus what I predicted. Some I got right, some not! Dixon in a dayglo yellow would have been a complete unknown. That was challenging.

“But in Josef’s case, the fact he’s around for a while and Direct Supply is huge here, and supported him, gives that some legitimacy. Odds are good there will always be a Direct Supply car – at least in Wisconsin – so year-to-year there is continuity.