JOLIET, Illinois – Doug Kalitta is used to success in life.

He owns and operates one of the biggest air charter services in the world. Before he switched to drag racing, he was one of the best sprint car and midget car racers, including winning the 1994 USAC sprint car championship.

And since he switched to NHRA drag racing in 1998 as a Top Fuel driver, he’s gone on to considerable accomplishments, including ranking fourth in all-time Top Fuel wins (41).

But for all the success he’s enjoyed, Kalitta is still chasing a dream: winning that elusive first NHRA Top Fuel championship.

But that elusive championship may finally be well within the Ann Arbor, Michigan native’s reach. 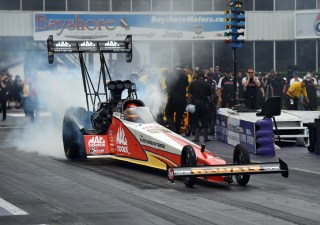 Kalitta comes into this weekend’s K&N Route 66 Nationals at Route 66 Raceway at one of the best places he’s ever been in the straight-line game.

The nephew of legendary NHRA team owner Connie Kalitta has been nothing short of stellar in 2016. In the first 12 races thus far this season, Doug Kalitta has dominated Top Fuel.

He leads the Top Fuel ranks in wins (3), poles (3), semi-final finishes or better (9) and has advanced past the first round in 11 of events.

He also was the fastest in Friday’s two rounds of qualifying, with a speed of 330.23 mph.

“We’re qualifying good, going rounds and winning, all which we’re real proud of,” Kalitta told NBCSports.com Friday at Route 66 Raceway. “As competitive as it is out here, you try not to get too overconfident, but we’ve definitely got some good momentum and we’re feeling good about it.”

If he continues in the second half of the season what he’s done in the first half, it’s very possible Kalitta will finally shed the unofficial title of “best Top Fuel driver never to win a title.”

“That’s what’s in all of our heads, that’s our focus,” Kalitta said. “It’s obviously what we’re thinking. We’ve been here a few times and this is an incredible opportunity for me this year with Mac Tools, Red Line Oil, Toyota and all my guys.

“At the end of the day, we just have to go one round at a time. Everything is clicking here, so we’re very hopeful we can stay running towards the front and be there at the end of the season.”

Kalitta’s success this season is not a total surprise. He has built upon a surge late last season and carried it over into 2016.

But what is a surprise is Kalitta is doing so well in the first Top Fuel chassis ever built in-house at Kalitta Motorsports.

“We’re keeping the momentum we had from the end of last year,” he said. “We’re just continuing to build on what we’re doing.

“We’ve started running our in-house chassis; we’re pretty proud of those things. So we’re hoping there’s an advantage with all that. Everybody’s doing an incredible job with everything, just all the preparation and detail that goes in to keeping these things all together.

“It’s just a good overall team effort. Jim Oberhofer, my crew chief, has been out here doing this forever and it’s a real passion for all of us, but he’s doing a great job. We’re trying real hard and it’s been a lot of fun. We’re going rounds and competing for the win, so it’s been going good.

In addition to being No. 1, Kalitta is in a different sort of position than he usually in: instead of chasing his rivals, they’re chasing him now.

“It’s good having those guys chasing us,” Kalitta said. “It’s just real competitive out here. There’s just a number of cars out here that are running good, including ours, so we’re just looking forward to being in Chicago, which we love running here. We always get a lot of fan and family support. It should be a good weekend.

“Obviously, we have to get to Indy before they reset the points. Hopefully we’ll still be No. 1 and we’ll end up with 30 additional points going into the Countdown (the six-race Countdown to the Championship playoff to determine the season champion). That’s our goal.”

And there’s one other goal. In addition to winning the championship for himself, Kalitta wants to win it for Uncle Connie.

“Yeah, that’s the goal, for sure,” Doug Kalitta said. “It’s cool to see his passion for this sport for as many years as he’s been out here.

“Trust me, he’s really gunning for us to win the thing. It certainly would be great to do so for Connie, our family, friends and fans. We’d have one heck of a celebration party.”