Tony Kanaan made an impressive start to the Iowa Corn 300 weekend at Iowa Speedway by topping the opening Verizon IndyCar Series practice on Saturday morning.

Kanaan arrived in Iowa hoping to go one better than his second place finish at Road America two weeks ago, where he was edged out by Will Power late on.

Opening practice at Iowa Speedway saw a handful of lap times dip below the official track record of 17.2283s, set by Helio Castroneves in 2014.

Kanaan turned in a lap of 17.2197s early in the 75-minute session, averaging a speed of 186.902 mph to finish 0.02 seconds clear of Castroneves at the top of the timesheets, with Josef Newgarden finishing just behind in third for Ed Carpenter Racing.

Although Kanaan cannot claim a new lap record as his time was set in practice, it does suggest that Castroneves’ benchmark will be beaten this weekend.

Andretti Autosport arrived at Iowa hoping to continue its six-year winning streak, but suffered a tough start to the weekend when both Marco Andretti and Hunter-Reay suffered spins early in practice.

Andretti lost control at Turn 4 but was able to keep his car out of the wall and return to the pits unscathed. However, Hunter-Reay was less fortunate, bumping the wall with the rear of his car.

“I had traffic in front of me and was trying to complete the final lap of my qualy sim,” Hunter-Reay told NBC Sports.

“Combined with the track and the patches, it being a green track, not a lot of Firestone rubber down, the rear snapped quite a bit earlier than Marco’s did.

“It’s worse down low. Problem is the rear gets over the bumps and it turns around. We just need to get more rubber down. Right now there is nothing down so there’s nothing we can tell at the moment.”

A third yellow was called for debris with 17 minutes remaining in the session, but the track quickly returned to green to allow some late flying laps to be completed.

Indy 500 winner Alexander Rossi topped the lap charts by some distance, putting in 125 laps – 35 more than any other driver – in a bid to mileage out his engine. He ultimately finished the session 11th-fastest. 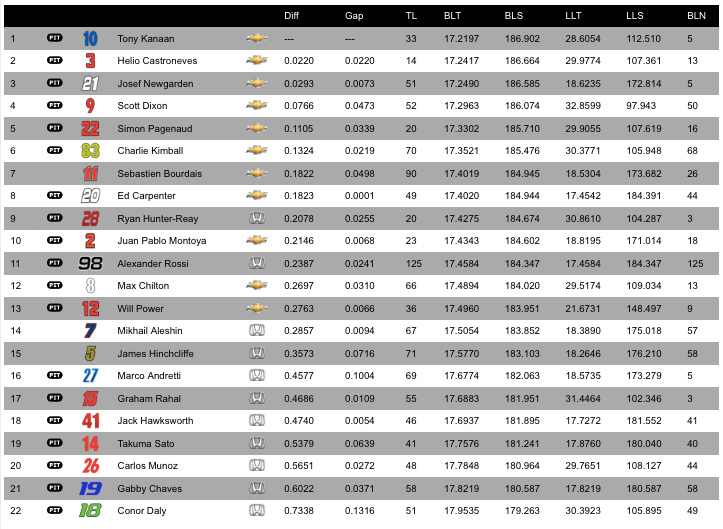