NEWTON, Iowa – Simon Pagenaud has secured his fifth Verizon IndyCar Series pole position of the year for Sunday’s Iowa Corn 300 (5 p.m. ET, NBCSN) in the No. 22 Menards Team Penske Chevrolet, with a two-lap average of 185.859 mph at the 0.894-mile Iowa Speedway.

The Verizon P1 Award joins previous poles at Barber, the Indianapolis Grand Prix and both Detroit races. He also started first at St. Petersburg after teammate Will Power failed to start owing to his injuries.

The pole is Team Penske’s 500th in its history as an organization, across all series, in its 50th year. Will Power’s pole at the last IndyCar race at Road America was the 499th.

“That’s pretty cool isn’t it. 500 – how cool is that,” Pagenaud said. “It is just qualifying, we have a lot of work to do this weekend.  But it certainly a great stamp on the work the No. 22 team has been doing as well as the whole Penske organization.

“It is such a gamble for the engineers in this situation. You only get two laps. Conditions from this morning to the afternoon changed.  It is fun. When you get the car right like this on an oval.

“The biggest statement we want to show is we are strong on ovals as well and want to win. I’m super happy about that. I’m super happy we can show some speed. We were fast at Indy as well, but mechanical took us out of that.  It’s great to be here. It is great to show so much strength.

“I’m the lucky one who got to win the 500th pole for Team Penske.  A Frenchman and on an oval!”

Pagenaud knocked off teammate Helio Castroneves from the top spot as the 10th of 22 drivers to turn a lap.

Pagenaud was fifth in first practice but advanced come the time of qualifying.

Josef Newgarden, who didn’t test but has a strong baseline from teammate JR Hildebrand’s setup, qualified second ahead of Castroneves, Max Chilton in a career-best fourth and Charlie Kimball completing the top five.

Chevrolet aero kits and engines occupied 10 of the top 11 spots on the grid, Mikhail Aleshin proving the lone Honda interloper in ninth.

That being said, Honda cars also struggled in qualifying last year and Ryan Hunter-Reay rebounded to win his second race in a row and third in four years. Honda’s only losses at Iowa came in 2012 and 2013 when Hunter-Reay and James Hinchcliffe in then-Chevrolet-powered entries for Andretti Autosport. 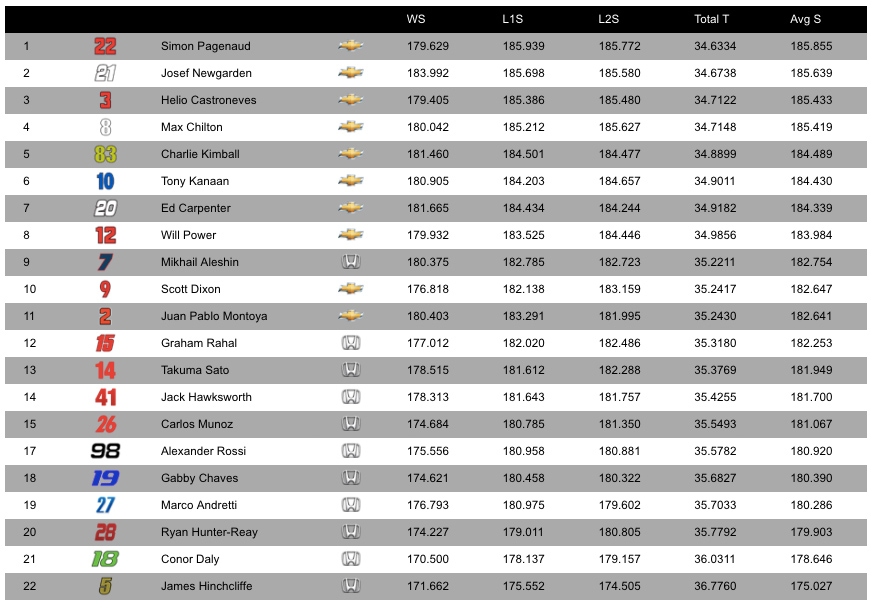