Simon Pagenaud led the session with a best time of 1:01.7081 in the No. 22 PPG Automotive Refinish Chevrolet for Team Penske.

But the story of the session was incidents, because they were always threatening to happen and this session they finally did.

Just before the halfway mark, the first IndyCar accident happened of the weekend.

Juan Pablo Montoya clipped the inside apex at Turn 11 in his No. 2 DeVilbiss Team Penske Chevrolet, which then proceeded to shoot his car out to the right side of the course, and heavily into the Turn 11 retaining wall.

Montoya got out of his car under his own power but the car was substantially damaged on the right side.

A second red flag occurred just after the 24-minute mark when then-session leader Mikhail Aleshin in the No. 7 SMP Racing Schmidt Peterson Motorsports Honda looped his car exiting Turn 1. He resumed under his own power with no damage and no need for assistance from the Holmatro Safety Team. Aleshin posted a 1:02.7016.

After a brief restart the red flag flew for the third time in the session at the 30-minute mark, when Charlie Kimball hit the exit of the Turn 11 wall in the No. 83 Novo Nordisk Chevrolet, then careened back to the inside wall. Kimball’s hit wasn’t as severe as Montoya’s but will still require the Chip Ganassi Racing team to do a bit of work to fix the car.

The planned 45-minute session was extended an extra five minutes to account for the lost time.

In those extra five minutes, times dipped into the low 1:02 bracket before Castroneves uncorked the first 1:01 of the weekend at 1:01.9091, and then Pagenaud topped that.

Castroneves was second ahead of Will Power, Scott Dixon, top Honda runner James Hinchcliffe on home soil in fifth and Sebastien Bourdais, the session one leader, in sixth. 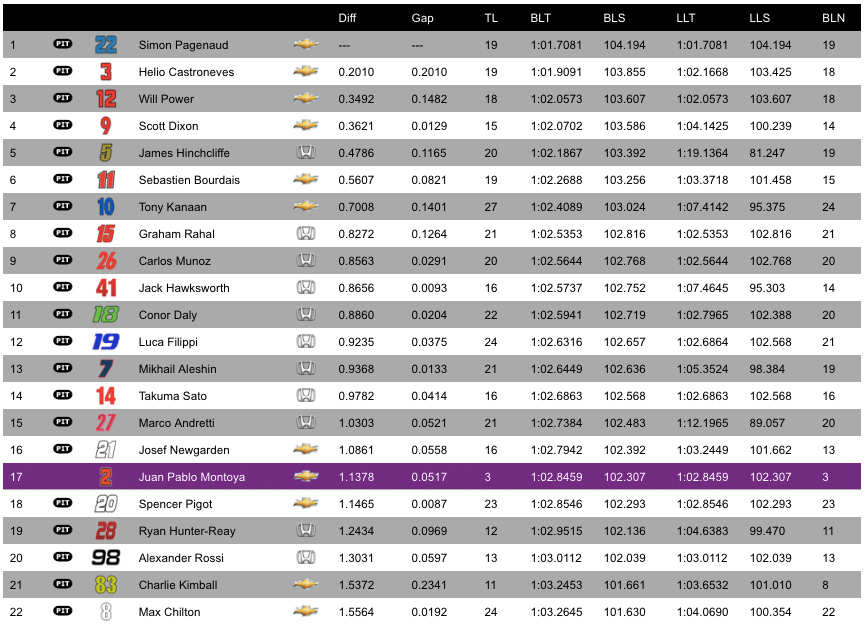