Sebastien Bourdais closed out practice for the Honda Indy Toronto at the top of the timesheets as drivers continued to dial in ahead of qualifying later today.

Race officials made minor changes to the track overnight, moving the wall at Turn 8 back six feet to give drivers more room and sandblasting Turns 1 and 9 to provide more consistent grip through the corners.

The changes would quickly improve lap times, and the potential of a sub-1-minute lap is possible if there’s a big enough delta gain from the Firestone black primaries to the softer red alternates.

Official update from @indycar on slight track changes is below. #IndyTO pic.twitter.com/CwjPNkIdjk

Simon Pagenaud’s benchmark of 1:01.7 from Friday was quickly dwarfed, the Frenchman leading the way early on before teammate Will Power shot to the front.

Power was the first to dip below the 1:01 barrier, with Helio Castroneves following suit soon after in second place as the Penske drivers dominated much of the session.

With 13 minutes remaining, Bourdais produced a lap of 1:00.6035 to edge out Power by three-tenths of a second, laying down the gauntlet for the Australian in the final stages of the session.

Pagenaud popped up into second place, two-tenths shy of Bourdais’ time before the session was red flagged after Mikhail Aleshin hit the wall at Turn 5.

Although Aleshin was able to return to the pits under his own power, a swift clean-up was required under the red flag before the session resumed with less than two minutes remaining.

Bourdais led at the checkered flag ahead of the Penske trio of Pagenaud, Power and Castroneves, the fourth car of Juan Pablo Montoya limited to just 13 laps as the team continued to work on his engine amid ongoing problems.

Scott Dixon finished the session fifth for Chip Ganassi Racing ahead of Jack Hawksworth and Graham Rahal, while teammate Charlie Kimball rallied to P8. Aleshin and Tony Kanaan rounded out the top 10. 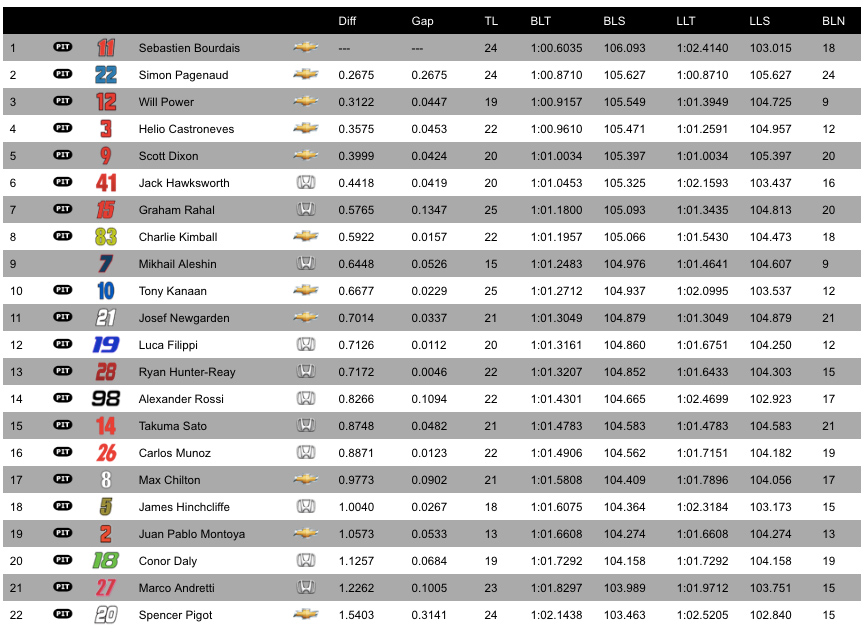