TORONTO – Scott Dixon scored the Verizon P1 Award ahead of Sunday’s Honda Indy Toronto (2:30 p.m. ET, CNBC), and thus has his first pole position of the Verizon IndyCar Series season, the 24th of his career and first since Mid-Ohio last year.

The New Zealander in the No. 9 Target Chip Ganassi Racing Chevrolet edged Helio Castroneves on his final lap in the Firestone Fast Six, with a 59.9073 lap time at the 1.786-mile Exhibition Place street course just ahead of Castroneves’ 59.9425.

The driver of the No. 3 Pennzoil Team Penske Chevrolet was first into the 59-second bracket in the Fast Six session after also doing so in Q2. But it wasn’t enough to hold off Dixon’s final lap flier.

Points leader Simon Pagenaud in the No. 22 PPG Automotive Refinish Team Penske Chevrolet starts next to Will Power on Row 2 ahead of past Toronto winner Sebastien Bourdais and James Hinchcliffe in Row 3. The P6 start is Hinchcliffe’s best in Toronto.

Temperatures of 68 degrees ambient and 107 on track set the stage for qualifying at Exhibition Place.

The highlight of Q1, Group 1, was both Dale Coyne Racing cars making it through to Q2, for the first time since Mid-Ohio 2014 (Justin Wilson P8, Carlos Huertas P10). Conor Daly was third in his group in the No. 18 Jonathan Byrd’s Hospitality Honda, with the returning Luca Filippi fifth in the No. 19 IMPCO ComfortPro Honda.

Those two were mixed in with session leader Pagenaud, then Castroneves, with Tony Kanaan and hometown hero Hinchcliffe also advancing.

Times tumbled with the track rubbering in further in Group 2. Juan Pablo Montoya in the rebuilt No. 2 DeVilbiss Team Penske Chevrolet was first into the sub-60 second bracket on Firestone reds, at 59.9964, only to be usurped by teammate Power in the No. 12 Verizon Team Penske Chevrolet at 59.7747.

“What we’re missing is overall grip and compliance. That’s so important on a track like this,” Hunter-Reay told NBCSN. “We’re not even on the same planet as the front runners when it comes to grip. … We’re fighting the car. Really swatting at flies.”

Rahal added, “I (went for it) and we hit the fence. The car is still ill-handling. I told the guys it was going to take a magic lap to advance, I knew it. Our basic balance, all weekend, we’ve been killing the rear tires, can’t put power down at all. … I went for it and the sucker went straight and we just tagged the wall.”

The Andretti Autosport quartet did not advance in total, with Coyne and Schmidt Peterson Motorsports carrying the flag for Honda in the Honda Indy Toronto qualifying.

In Q2, Dixon and Pagenaud both went into the 1:00.4 bracket on Firestone blacks. Meanwhile Daly went reds to reds for Coyne in his quest to advance.

Castroneves added his name to the 59-second bracket with a 59.8562 lap, ahead of Power, Dixon, Pagenaud, Bourdais and Hinchcliffe.

Daly came up just short of the Fast Six in seventh, albeit still in a career-best starting position. He was just ahead of longtime friend Newgarden in eighth – thus making for an American Row 4 lockout – with Montoya ninth, Aleshin 10th, Filippi 11th and Kanaan in 12th.

“We’re just trying to improve. … It’s real challenging to make it there,” Daly told NBCSN. “Everyone is so good in this series. It’s just cool to be in that group and kind of fighting for those positions. I’m proud of the team, we needed a rebound from last weekend.”

Newgarden, the defending Toronto winner and Iowa dominant race winner, added to NBCSN: “I’m always optimistic. There’s always something that can happen in the race. This is our best session; qualifying is the highest we’ve been this weekend. You hate to say eighth is the best we’ve been this weekend, but I’ve always got faith we can figure it out. That’s what happens when you get to racetracks, you try to solve the puzzle. We’re going to have to figure it out, man, we’re the defending champs. We’ll see what we can do tomorrow.” 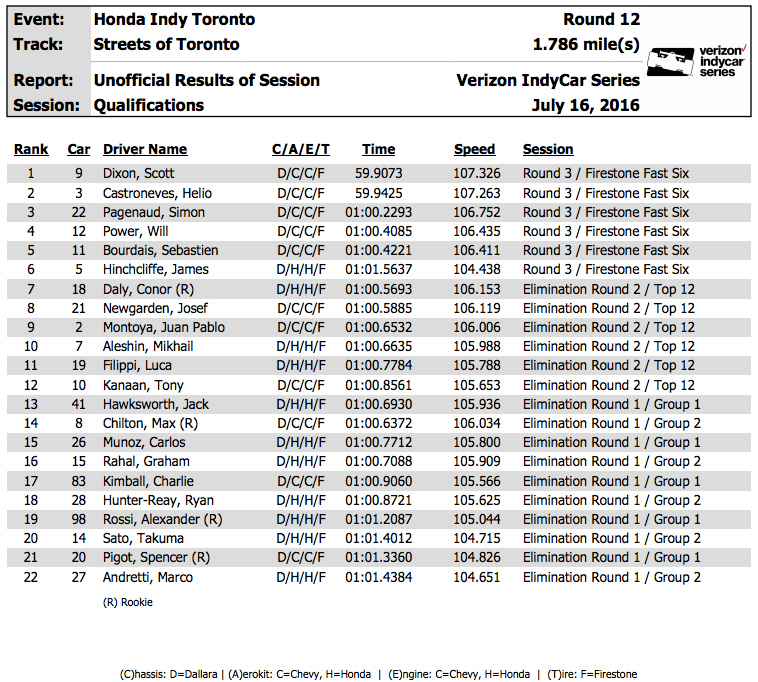