Thursday’s team test at the Mid-Ohio Sports Car Course is set to be one of the most important of the year for the Verizon IndyCar Series.

First, it’s another in-season test to prepare for the upcoming Honda Indy 200 on July 31, the last race before the series’ longest in-season break of the year (albeit with three other test dates scheduled between Mid-Ohio and the Pocono Raceway event on August 21).

And secondly, it’s the first chance of the year for teams to evaluate the next generation of potential IndyCar drivers en masse.

Meanwhile Jack Harvey will rejoin SPM for his second test, having also tested with the team last year. Harvey and De Melo are testing under a Rookie Evaluation test designation, not Indy Lights Day designation, and that’s important to note as you’ll see further below. 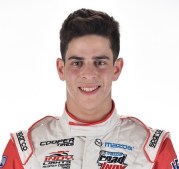 “I am excited about the test this week with Schmidt Peterson Motorsports,” De Melo (right) said in a release. “We have put a great deal of off-track preparation into my first IndyCar test. Sam Schmidt and his team are meticulous about introducing a driver to IndyCar, from fitting myself into the car, talking to engineers, going over the simulator, down to being physically and mentally fit for the challenge.

“Everyone at SPM is professional and I am thrilled that I have this opportunity with such an elite organization. I would like to thank IndyCar and SPM for believing and trusting in my abilities to perform at this level.” 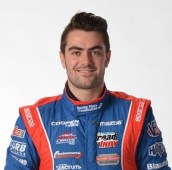 Harvey (right), who’s back, added, “It’s been a tough year but that’s what makes the return to driving all the better. Mid-Ohio is a track I’ve done well at before so I’m hopeful that I can help the team with their testing plan moving forward. Thank you to SPM for giving me this opportunity and I can’t wait to get started.”

Rosenqvist and Enerson told NBC Sports they’d be going to both teams’ respective shops this week for seat fits; Enerson is highly probable to then make his IndyCar race debut with Dale Coyne Racing at Mid-Ohio later this month.

Note that Team Penske tested both Piquet and Pigot, as both Juan Pablo Montoya and Will Power tested two separate cars. The remaining five drivers split their time with a single IndyCar driver.

In this last month, INDYCAR (sanctioning body) has added a clarification to its rulebook, Rule 6.2.3.3.1, which limits teams without an Indy Lights program to just one car for an Indy Lights Day driver test.

The clarification comes because the initial rule, Rule 6.2.3.3, didn’t specify how many cars per team. That initial Rule 6.2.3.3, Indy Lights Series Driver Test, reads as follows:

This rule clarification has reportedly sidelined at least three drivers who were slated to test on Thursday with a team that does not currently have an Indy Lights program.

However, it does not preclude any of them taking part in further series test days later this year – and further days where “Indy Lights driver TBD” are listed at Watkins Glen on August 11, and Sonoma on Sept. 8.

Jason Penix is Director of Development Series for INDYCAR and explained the clarification process for why the addendum was created.

“The idea there is to protect the guys that have entries in both INDYCAR and Indy Lights. They do that for a reason. So the rule is added for that reason,” Penix said.

Mike Hull, managing director of Chip Ganassi Racing Teams, understands why the rule change was made. Ganassi does not have a Lights program, although rumors swirled late last year the team was exploring the option for 2016.

“The rules have slightly changed and they limit it to one car per group, so it’s not two,” Hull told NBC Sports. “Each entry – no matter how many cars you run – gets one car. It’s one (car) for IndyCar and Indy Lights like last year.

“I remember (last year) we had separate cars. That doubled the people, the travel. What’s going on here is a much better solution. We’ll go run Felix in the morning and Scott in the afternoon.”

Hull also extolled Rosenqvist’s (right) ability level, noting he came to the team by way of his Formula 3 teammate of a year ago, Lance Stroll.

“We have a relationship with Lawrence Stroll and he recommended him highly,” Hull said. “Felix was Lance Stroll’s teammate at PREMA Powerteam last year. Lawrence Stroll really talked him about how great he is and what a great teammate he is, and how much he helped Lance. He said to Chip and I, ‘If you have the opportunity to test him, it would be great if you could.’

“Looking at the things he’s doing globally – the success he’s having – you want to see what he’s all about.”

One of the drivers not testing this week but hoping to do so in the future is Zach Veach, who had a bit of a midseason roll going with three straight podiums at Road America and Iowa before a tough Toronto weekend.

Veach, who drives for Belardi Auto Racing in Indy Lights, said he’d been approached following Road America and at Iowa to do the test, but the rule change and reduction to just one car only paused his shot for the moment. That said, he understands why INDYCAR made the decision it did.

“As a young driver that’s the happiest day you hear, because you’ve worked so hard to get there,” Veach told NBC Sports. “The celebration of that almost completely outweighed the win. The rule change was then made clear 4-5 days later.

“It was probably done to keep it fair for INDYCAR teams financially. I fully respect their decisions. It’s important to have these test days so that Indy Lights drivers – not just myself, but others as well – get that chance.”

Perhaps ironically, Veach – a Mazda Road to Indy veteran dating to 2010 – will see his Belardi teammate Rosenqvist get a shot in an IndyCar before he does. But Veach said he’s quite happy to see the talented Swede get his shot.

“Felix is a friend first before a competitor,” he said. “I’m extremely happy he’s getting his test with Ganassi. He can show how fast Indy Lights drivers can be. There’s no hard feelings; it’s actually quite the opposite.”

Penix said the goal of this test as well as other future INDYCAR tests featuring Indy Lights drivers is to showcase the next generation of talent, especially given that the Lights field is so strong right now.

“The quality of driver and team in Indy Lights right now is off the charts,” Penix said. “I’ve been around INDYCAR for 10 years… I’m not sure we’ve seen an Indy Lights field this deep in some time. It goes back to Hinch, Newgarden, Kimball, that era.

“As a whole we want as many guys as possible to get a shot. That’s what they’re in this for.”