Tony Bennett left his heart in San Francisco. But for Verizon IndyCar Series driver Graham Rahal, his heart will always be in Mid-Ohio.

That’s both the middle of the Buckeye State, where he grew up in the shadow of the capital city of Columbus, as well as – more importantly – Mid-Ohio Sports Car Course, 50 miles north in Lexington, Ohio.

Mid-Ohio was where Rahal watched his father, Bobby, race (best career showing there were a pair of third-place finishes), qualify, practice and test.

Mid-Ohio was where the younger Rahal learned a great deal of not only how to drive a race car, but more importantly, how to be a race car drive both inside and outside the cockpit.

If Rahal had a dollar for every time he dreamed about or fantasized about winning an IndyCar race at Mid-Ohio, he could probably own the track now.

Next to winning the Indianapolis 500, winning an IndyCar race at Mid-Ohio was right at the top of the younger Rahal’s bucket list – which he finally achieved in emotional fashion last year.

“Mid-Ohio is home to me,” the younger Rahal said in a media release. “I grew up at the track and spent so many days there as a kid.

“Watching races there, being a part of it, seeing and loving what it’s all about is a big part of who I am. The way it all came together last year, every aspect of it made it perfect for me. Having the Buckeye helmet and gear, having my entire family there – which never happens, ever, since everyone is spread out – and having the crowd support, to have that sort of experience makes it impossible to tell anyone how much it means to me.

“The sense of accomplishment for me is so great. Everyone knows this but I love Ohio. I’m very proud to be from Ohio and that event means so much to me. To win it is a career accomplishment that I will never forgot or take for granted. It means just as much to me now as it did then. To me it’s one of the highlights of my lifetime, and definitely the most meaningful win of my career. I sure hope it happens again.”

Prior to last year’s win, Rahal’s best IndyCar finish at his home track was fifth in 2014.

(He previously won one other time at Mid-Ohio: at 16 years old became the youngest driver to ever win the SCCA National Formula Atlantic Championship Runoffs in 2005.)

Rahal’s only other IndyCar top-10 at his home track was eighth in 2009, when he drove for Newman-Haas-Lanigan Racing (he’s now in his fourth season with Rahal Letterman Lanigan Racing).

And even though he’d leave the 2.258-mile, 13-turn natural terrain road course time after time without the checkered flag, Rahal was determined to one day do it – and he did just that on August 2, 2015.

Rahal drove his Steak ‘n Shake/Maxim sponsored Honda to the winner’s circle, leading one-fourth (23 laps) of the 90-lap event, taking the lead for the first and only time of the day on Lap 68 and holding on the rest of the way.

“We ended up getting up to the top three on pure pace then I was held up in traffic. I said over the radio that I wanted to pit. I like to think about strategy a lot as a driver, which is the way my dad was. I knew that with the strategy we were running, we were in the window to pit, I knew I was getting held up so I made the call and told them I was coming in.

“It happened to go yellow right as we came in, which was absolutely perfect. It worked out great for us. … There was so much pride involved in that day. It’s hard for me to explain the feelings that I had to people. It was a great moment in my life and I just hope it carries over and we see a lot of support this year.”

Sunday will be Rahal’s ninth IndyCar race at Mid-Ohio, but there will be a definite change in the aura from last year. He came into and left the track ranked No. 2 in the series standings, earning his second win of the season.

That’s not the case this year.

Rahal and his team have had strong showings for the most part, but have struggled in their quest for the winner’s circle (none), and even podium finishes (just two in the first 11 races). 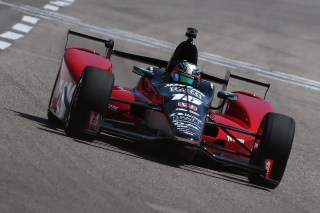 Even worse, they’re mid-pack in the series standings (11th), 140 points behind points leader Simon Pagenaud. On the flip side, Rahal is only eight points out of seventh place (occupied by Alexander Rossi), and just 52 points behind fifth-ranked Josef Newgarden (344).

Overall, Rahal has five top-five finishes and a per-race finishing average of a respectable 9.4. That includes finishes on permanent road courses of second and third at Barber and Road America, as well as street course runs of fourth at Indianapolis (Grand Prix) and Belle Isle Race 1.

But he also has six finishes between 11th and 16th (twice), including disappointing showings in the season’s last two races – at Iowa (16th) and Toronto (13th). He also struggled in street courses at St. Petersburg (16th), Long Beach (15th) and Belle Isle Race 2 (11th).

That’s why a little home cooking back in Mid-Ohio may be just what Rahal needs to get back on track and make a late season surge upward in the rankings.

“We have certainly had an up and down season, and are in need of a good result this weekend in a big way,” Rahal said. “It’s exciting to go back as the defending champion, but we want to do that again year in and year out. We just have to focus on the task at hand, and hopefully we can pull it off.”

Rahal may have an ace up his sleeve. Of 20 drivers that took part in an open test at Mid-Ohio on July 21, Rahal was the fastest Honda-powered driver.

“The test was good,” Rahal said. “We were focused on getting to the mileage limit on our Honda engine, which we successfully did.

“Now we turn our attention to finding little bits of speed we will need to be quick come this weekend. I hope we can get the balance a bit better, but it didn’t feel far off on the test day.

“I expect that we should be very competitive and our performance from the other road courses should carry over to Mid-Ohio. The tricky part is that everyone is competitive nowadays. There are no longer any bad teams or non-contenders. So I fully expect it to be a patented tight IndyCar race weekend and I hope the Steak ‘n Shake team can come out on top again!”