He may be one of the nicest guys in drag racing, but Cruz Pedregon has a fighting side to him.

He’s a big fan of the fight game, including pro boxers like Floyd Mayweather, Manny Pacquiao and others.

But it’s Pedregon who will be gearing up for quite a brawl during this weekend’s Toyota Sonoma Nationals at Sonoma (California) Raceway.

Ranked 12th in the standings and with just four races remaining to crack the top 10 and qualify for the NHRA’s six-race Countdown to the Championship playoffs, the two-time Funny Car champ is strapping on the gloves tight and plans to come out swinging this weekend.

Given where he’s ranked, some might consider Pedregon an underdog to make the playoffs. Right now, he’s 188 points out of 10th place (held by Alexis DeJoria), the final qualifying spot for the Countdown.

But make no mistake about it: the Southern California native, a winner of 35 national events, knows what to do to keep his title hopes alive. 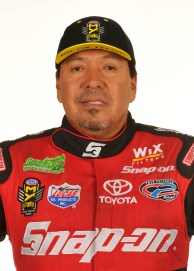 “My favorite fighter was Muhammad Ali (and) I feel like this time right now for me and our team is like Ali-Frazier 1,” Pedregon said in an NHRA media release. “Joe Frazier hit Ali with a big left hook right on the chin and (knocked) him down.

“Ali took a breath and got right back up and that’s what we have to do, just take a deep breath and get up, and keep fighting for these round wins and points.”

There’s no question Pedregon has struggled in 2016: he’s failed to advance past the first round in 11 of the season’s first 14 races, including eight of the last nine.

But if there was ever a time for a turnaround, it’s this weekend, as Pedregon is sponsored by Toyota and this is a Toyota-sponsored race.

There has been one bright spot this season for Pedregon: he reached the finals at Charlotte, but fell short of winning. Still, it showed his 10,000-horsepower Camry has what it takes to challenge for wins.

“The most frustrating part about the entire thing is just not having the runs we all know we are capable of running,” Pedregon said. “We are a 3.90s car, we are a 3.80s car, and we just haven’t been able to completely show our full potential.

“It also frustrates me for our team. I have the best group of guys I’ve ever had work on my car. There is no quit in them and even when they are frustrated like me they put their heads down and work harder because they want to win, they want to show people what we have here and I think that speaks to the core leadership on our team.”

But don’t think Pedregon is going to take a dive or roll over this weekend. He’s going to be punching from the first qualifying session until the final round – and he hopes to be the last man standing in Sunday’s eliminations.

“Our mindset for these next few races is first, figure out the little things that (are) happening to us and get them straightened out,” Pedregon said. “Second is just going out and running how I think our Snap-on Tools/WIX Filters Toyota is capable of running.

“I know we have a fast car, everyone knows we have a fast car, it’s just these little things jump up and happen to us and it’s frustrating. We go out to each qualifying session with the goal of top five in mind and we will fight for each round to get into the Countdown.”

Even though he’s in a catch-up position, Pedregon isn’t letting the pressure get to him. He’s one of the best drivers in the sport when the pressure is the highest.

In fact, Pedregon thrives on pressure. That, combined with a good fight, could turn things around in a hurry for him. And he has the perfect example of past history to prove how solid a punch he can land.

“Every qualifying session, every round of racing means something,” Pedregon said. “If you feel as if you’re under pressure, people tend to tense up and lose focus and miss their mark.

“You can control only what you can control and that’s all you can do. (In) 1992 I won five straight races to clinch a title and in 2008 I won four.

“That’s not because I felt the pressure of needing to win, it was the mentality of going out and everyone doing the same routine over and over, like chopping a tree down. I believe in my team and in my race car.”

WHERE: Sonoma Raceway, Sonoma, Calif. The track is located at the intersection of Highways 37 and 121.