LEXINGTON, Ohio – At a track he traditionally dominates, Scott Dixon fired the first shot of the weekend.

The driver of the No. 9 Target Chip Ganassi Racing Chevrolet ran a best lap of 1:04.4491 around the 2.258-mile Mid-Ohio Sports Car Course to lead the 75-minute first practice.

Dixon enters the weekend 83 points behind points leader Simon Pagenaud and needs a big weekend to have much hope to continue as Verizon IndyCar Series champion. He also enters after the news came out earlier this week that the team’s longtime primary sponsor, Target, will depart IndyCar at the end of the year.

James Hinchcliffe was top Honda in the first session of the Honda Indy 200 weekend, in P6.

Series debutante RC Enerson was 1.1042 of a second off the session lead but the nature of the field is so close that the driver of the No. 19 Dale Coyne Racing Honda was 21st.

Teammate Conor Daly had an off in the No. 18 Jonathan Byrd’s Hospitality Honda, potentially with oil on track, and nosed into the tire barriers at the Keyhole. It brought out the only red flag of the session.

Daly was OK and so was the car, except for the front wing assembly leaving the car.

“I hadn’t broke any later. Maybe oil down? I went straight off,” Daly told IndyCar Radio. “Really weird. But maybe that’s what happens to the track. I don’t have a ton of experience. I shouldn’t be doing that.”

Power had an off, Mikhail Aleshin had a 360-degree spin, and Alexander Rossi also went off, but none of those produced any dmage

Times are below. Second practice runs from 2 to 3:15 p.m. ET and local time, and airs LIVE on NBCSN (Also online at http://indystream.nbcsports.com) from 2 to 4. 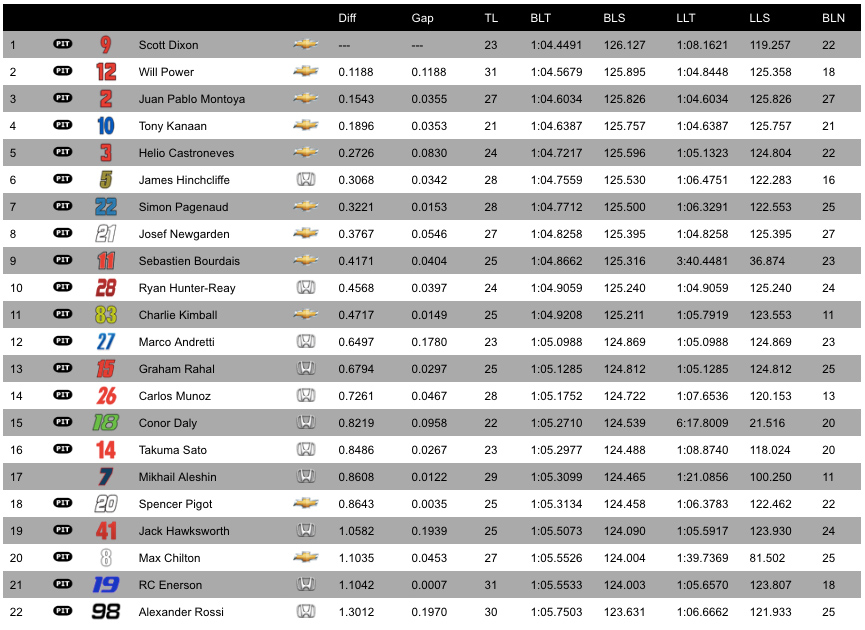