LEXINGTON, Ohio – Scott Dixon had dominated the Honda Indy 200 weekend up to this point, but courtesy of another strategic backfire he does not have the pole position for Sunday’s Verizon IndyCar Series race (2 p.m. ET, CNBC) at the Mid-Ohio Sports Car Course.

Instead, Simon Pagenaud has secured his sixth Verizon P1 Award of the season in the No. 22 PPG Automotive Refinish Chevrolet for Team Penske, and set a new track record at the 2.258-mile road course in the process.

Dixon missed the Firestone Fast Six after the No. 9 Target Chip Ganassi Racing Chevrolet team determined that his lap in Q2 would be good enough to make it with rain on the horizon.

It wasn’t, and Dixon fell to 11th – which opened the floodgates for the rest of the field.

“Tricky, tricky session,” said Pagenaud, who adds another bonus point to his tally this season. Pagenaud led Power by 47 points going into the weekend.

“It was more on me really because I have been struggling a little bit with my really bad lower back. They did a lot work on me. We didn’t need to do too much on the car, more on me this weekend. We put those Firestone red tires on and again, the car was beautiful. That was an interesting qualifying. The expectation of rain, no rain. There was some drops in Q2 that made it more difficult. And there at the end I think the strategy was perfect to start Q3.”

They’ve all made Firestone Fast Six appearances this year but it’s been relative dry spells. Pagenaud has made all eight and this was Power’s sixth.

This is the first one for Kimball (qualified second), Rahal (third) and Newgarden (fifth) since the Angie’s List Grand Prix of Indianapolis, although both Rahal and Newgarden were sent to the rear of the field for infractions found in post-qualifying technical inspection.

Hunter-Reay makes the Fast Six for the first time since St. Petersburg, when he qualified sixth.

In Q1, there were no major surprises but disappointment for a handful of notables. After ending third practice sixth overall, Max Chilton was only seventh in his group, and frustrated with how much the track change. Meanwhile Spencer Pigot was only 10th and Marco Andretti 11th in the session – Andretti continuing to take the blame for his season long run of poor qualifying.

That new track record lasted all of one group, with Power going 1:04.1430 and Dixon 1:04.1942 in Q1, Group 2. Rahal was third ahead of the Schmidt Peterson Motorsports teammates, James Hinchcliffe and Mikhail Aleshin, and Alexander Rossi – who like the three who made the Fast Six also advanced out of Q1 for the first time since the Angie’s List Grand Prix.

Tony Kanaan was seriously frustrated after the session and refused to talk, and Sebastien Bourdais and RC Enerson were just behind in the session. Enerson, who’s had an impressive debut weekend for Dale Coyne Racing, was in the top six on his first run on Firestone reds before he made a mistake and got stuck in traffic on his second set. But 18th, four spots and 0.5 of a second clear of teammate Conor Daly, is still a solid first qualifying effort.

Q2 saw the track change as the threat of rain continued, but did not fully interrupt proceedings.

The surprise drops beyond Dixon were Helio Castroneves and Juan Pablo Montoya, who start seventh and eighth, then the Schmidt twins in ninth and 1oth and Rossi in 12th.

Once into the Fast Six, Pagenaud edged ahead of Power to secure the top spot, ahead of the quartet of Americans. 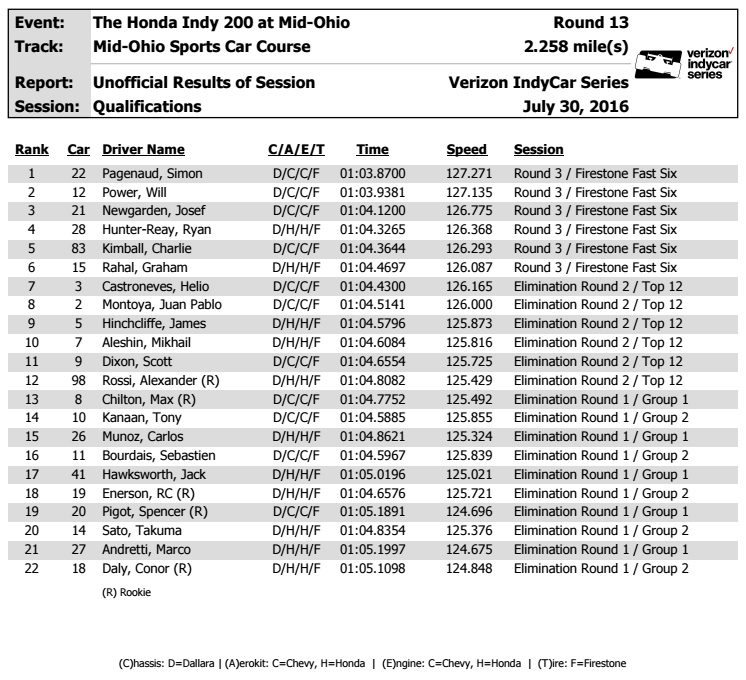