DeJoria suffered a fractured pelvis after crashing Sunday in the Toyota Sonoma Nationals at Sonoma Raceway, north of San Francisco.

She was in a first round elimination race with John Force when her car suddenly veered left and into the wall.

When DeJoria climbed out of her race car, she complained of pain on her left side. She was first taken to the track medical center before being transferred by ambulance to Queen of the Valley Medical Center in nearby Napa, California.

Following x-rays and a CT scan, it was determined that DeJoria had suffered a high-energy fracture of the left pelvis. 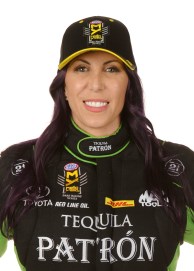 According to a press release on DeJoria’s official web site:

“The fracture was caused when she struck the wall. The injury does not require immediate surgery, but is extremely painful. DeJoria is in good spirits and was more concerned with the condition of her race car, and if it was ok.

“She was released from the hospital on Sunday afternoon, and will start intense physical therapy as soon as possible, determined to get back on the track.

“DeJoria and the Tequila Patrón Toyota Camry Funny Car team were scheduled to compete next at the NHRA Northwest Nationals in Seattle, Washington, but due to injuries sustained, that race is to be determined.”