The IMSA WeatherTech SportsCar Championship headlines a busy weekend across the board for IMSA series at Road America as a part of this weekend’s Continental Tire Road Race Showcase. Others on the calendar include the Continental Tire SportsCar Challenge, Porsche GT3 Cup Challenge USA by Yokohama and the Lamborghini Blancpain Super Trofeo North America series.

With the calendar now having flipped to August, this starts the beginning of the run to the end of the season for IMSA.

IMSA held three races in four weeks in July, at Watkins Glen International, Canadian Tire Motorsport Park and Lime Rock Park, and that’s helped shape the championship going into its final four weekends of the year – Road America this weekend, VIR at the end of the month, Circuit of The Americas in September and finally Petit Le Mans at Road Atlanta the opening weekend in October.

Action Express Racing seized the momentum in the Prototype class following back-to-back wins at Watkins Glen and CTMP, albeit split one race each between its two Corvette DPs. Joao Barbosa and Christian Fittipaldi took the No. 5 Mustang Sampling car to the win at the Glen, before Dane Cameron and Eric Curran won at CTMP in the No. 31 Whelen Engineering/Team Fox for their first triumph of the season. It gives the No. 5 pair a four-point lead over the No. 31 pair (220-216). The Taylor brothers in the No. 10 Konica Minolta Corvette DP are nine points back (211).

Cameron and Curran won here last year in an AXR 1-2, and Fittipaldi and Barbosa won in 2014, so AXR seeks a Road America three-peat this weekend.

Hoping to stop them are the five other Prototype protagonists, the remaining Corvette DP from Visit Florida Racing, the pair of Mazda Prototypes, the No. 60 Michael Shank Racing Ligier JS P2 Honda and DeltaWing.

On the strength of three wins in the last four races, the No. 8 Starworks Motorsport Oreca FLM09 of Renger van der Zande and Alex Popow has gone out to a 17-point lead on Robert Alon and Tom Kimber-Smith in Prototype Challenge (PR1/Mathiasen Motorsports).

The PC grid has grown by two with a couple interesting additions. The third Starworks entry has Gustavo Yacaman in for Sean Rayhall along with Jose Gutierrez. Then BAR1 Motorsports expands to two cars; race defending winner Bruno Junqueira joins in the No. 20 car alongside Matt McMurry, with Johnny Mowlem moved to the second car (No. 26) alongside Don Yount.

GT Le Mans has been something of a roller coaster year depending on the Balance of Performance adjustments, but the points title is shaping up nicely between the No. 4 Corvette C7.R pairing (Oliver Gavin and Tommy Milner) and No. 67 Ford Chip Ganassi Racing Ford GT (Ryan Briscoe and Richard Westbrook), each of whom has three wins. They’re separated by 10 points – 228 to 218.

The No. 911 Porsche 911 RSR of Patrick Pilet (defending class champion) and Nick Tandy has the other win, at Long Beach, while Ferrari is yet to win this year despite the pace of the new 488 GTE.

In GT Daytona, Christina Nielsen and Alessandro Balzan have the top spot in the No. 63 Scuderia Corsa Ferrari 488 GT3, at 212 points. The No. 44 Magnus Racing Audi R8 LMS pair of John Potter and Andy Lally are second on 199.

Hanging in but needing the No. 63 car to have an issue are three pairs separated by only two points in third to fifth. The No. 23 The Heart of Racing Porsche 911 GT3 R pair (Mario Farnbacher, Alex Riberas), defending Road America winners the No. 33 Riley Motorsports Dodge Viper GT3-R (Ben Keating, Jeroen Bleekemolen) and the No. 6 Stevenson Motorsports Audi R8 LMS (Andrew Davis, Robin Liddell) are on 187, 186 and 185 points, respectively.

Today’s also when IMSA rolls out the schedule and other platform announcements today for 2017, and that takes place at 11:45 a.m.

Tune-in info is below. 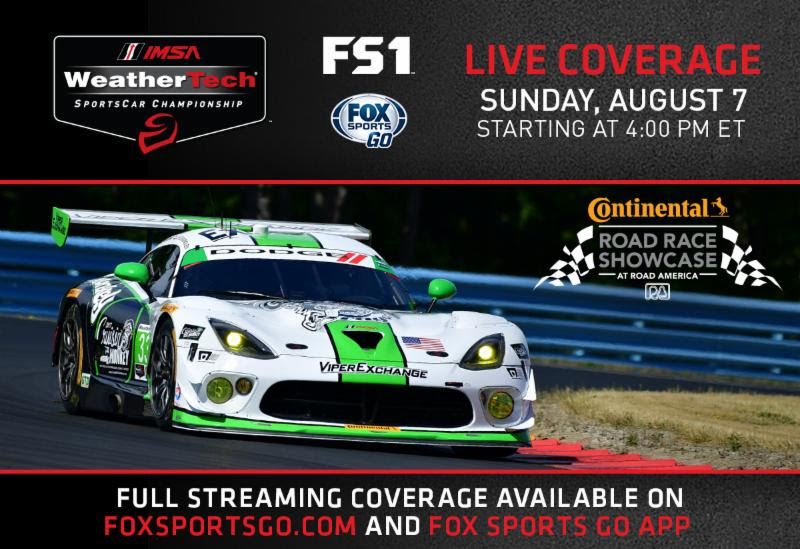