The “Mad Russian” led an international flavor of talent on the grid, with six different nationalities represented in the top six positions.

But the driver of the No. 7 SMP Racing Schmidt Peterson Motorsports Honda reeled off a two-lap average of 220.445 mph, which was enough to hold off the remainder of the 22-car field for the top spot.

Aleshin also led the morning practice session, albeit with a tow-assisted lap in the 221 mph range.

While this is Aleshin’s first career pole, it’s the second of the year for SPM (James Hinchcliffe, Indianapolis 500) and third for Honda (Hinchcliffe, Carlos Munoz at Texas). He also won the pole for the Rolex 24 at Daytona for SMP Racing.

Josef Newgarden will start second in the No. 21 Fuzzy’s Vodka Chevrolet, for the third time this year. The young American also started second for the Indianapolis 500 and Iowa Corn 300 races, finishing third at Indy and dominating Iowa where he led 282 of 300 laps.

Alexander Rossi meanwhile has a season and career-best position of seventh on the grid, with Will Power, Tony Kanaan and Ed Carpenter completing the top 10.

Power sits second in the points, 58 behind Simon Pagenaud, and the points leader will roll off from 14th on Sunday, a season-worst start.

Of note, Juan Pablo Montoya and Charlie Kimball qualified backup cars in 15th and 16th – Montoya’s a hodgepodge of parts and liveries – while Ryan Hunter-Reay was unable to get back out after his crash this morning. The defending Pocono winner starts 22nd and last.

Qualifying results are below: 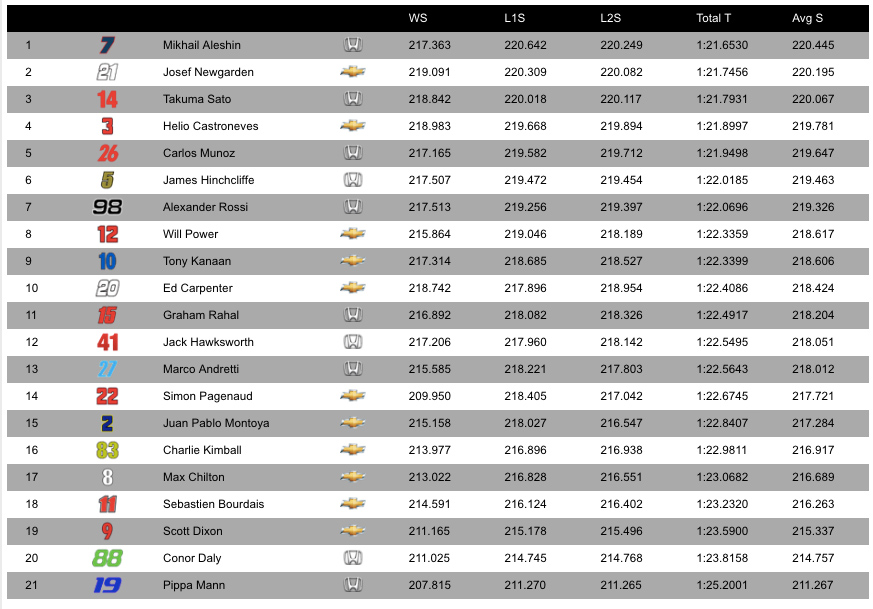